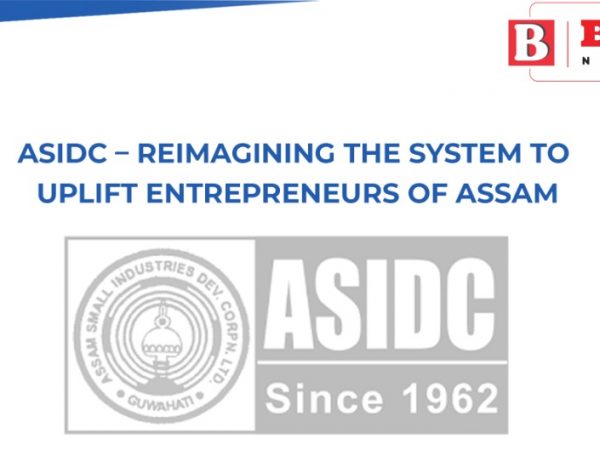 Assam Small Industries Development Corporation (ASIDC) is one of the first corporations formed by the State Government back in the 60s. It was essentially meant to help entrepreneurs who are small and marginal and who

do not have any liquidity in hand. The Article of Association/Memorandum of Agreement of the corporation allows the corporation to help the entrepreneurs by providing land in lease to set up their businesses, providing loans to entrepreneurs in need at a quite competitive rate of interest, and essentially, providing them with the market connect. According to the Ministry of MSME, Assam, popularly called the Gateway to North-East India has the highest number of MSMEs estimated at 6.62 lakhs, housing numerous industries like tea, agriculture, and allies, sericulture, and tourism. Although some of them might have stopped operating or died down completely during the course of the pandemic. However, new entrepreneurs are coming up every day with a vision of establishing a successful business in town. Business-Northeast captured the essence of the entity that is at power to support these entrepreneurs through an exclusive interview with the Managing Director of ASIDC – Mr. Kausar Jamil Hilaly, ACS.

Mr. Hilaly is also the CEO of GMDA, who has been currently on quite a fan roll after the inauguration of the Mahabahu Bhrahmaputra River Heritage Centre located in the Old DC Bungalow at Panbazar. As he has taken GMDA to see heights in terms of developing the hub of Northeast, Guwahati, he is also adamant about improving the Small Industry sector within the system of the Government. Mr. Hilaly mentions that the area of responsibilities of ASIDC has shrunk over the years, primarily because of a lack of planning. The one thing, which is most essential, is the aligning of the local products produced by these small entrepreneurs with the local market. But the corporation is lagging behind in this criteria, which has invariably made losses for the corporation over the last few years. Thus, ASIDC is currently being reprogramed to think bigger and wider, for which along with resources what is required is to reimagine the whole purpose of ASIDC in order to help the young and upcoming entrepreneurs.

The problem faced by the SMEs is that the banks do not provide loans to them without any collateral, for example, land or machinery. But the land is something ASIDC provides on lease under their name which the entrepreneurs cannot put as collateral. And machinery is what they need the loan for. Moreover, banks are not very keen on taking the machinery as collateral as there is risk involved. Now ASIDC is supposed to give out loans for which the corporation must have a corpus amount dedicated for the same. But unfortunately, due to the losses made over the years, the corporation does not have enough resources to lend out money to these entrepreneurs. The sanctioned strength of ASIDC is roughly about 282 but it has only 64 people in place. The corporation is bound to pay the salaries of course but due to the lack of funds, ASIDC has not been able to even pay the retirement dues well. Even during the pandemic, ASIDC made it easier on the existing SMEs by waving off the amount to be paid for the lands they have rented out. The SMEs thus could at least hold on to that liquidity as otherwise, they were not making anything during the pandemic. But again, this was also a double-edged sword, because while ASIDC did not insist on the revenue collection from these SMEs, it ultimately harmed the corporation’s finances.

The average annual expenditure incurred by ASIDC is about INR 4.5 Cr, thus that amount should be in hand with the corporation to function smoothly, which is about INR 40 lacs a month. But the total amount that flows into the corporation is merely INR 17 lacs. Per month ASIDC is already running at a loss of INR 23 lacs. Thus to recover from these losses, a lot of rethinking has to be done, probably even enhancing the rentals to an extent, which will again harm the entrepreneurs.  Because of the downfall in the financial state, the corporation is currently looking at how to sustain the entity and bring it back to proper functioning rather than focusing on entrepreneurs monetary wise. ASIDC understands that it is not fair for the small industries, but this help cannot be provided unless there is a paradigm shift in the whole functioning of the corporation.

The Procurement Preference Policy of the Government of India, amended in 2017, states that the Government will buy some of the products produced by the entrepreneurs but again, the amount generated through that is not big enough for ASIDC to make profits and in turn help the SMEs. Although, the Government also has schemes like the North East Industrial Development Scheme (NEIDS), formulated in 2017, which provides a package of fiscal incentives to eligible industrial units. But even then, the main question that arises is what will these industries do with the goods produced if there are no buyers?

Mr. Hilaly gives the answer to this by saying until and unless the reimagining of ASIDC happens, these problems will keep running in a vicious circle. Certain risks have to be taken, for example, using the province of asset monetization that the Government of India is doing, wherein ASIDC can lease out its assets, which means land in this case, too big corporations to be used commercially for a change. ASIDC has already plunged into the risk by allotting a portion of its land to OIL India Limited to set up its office in Guwahati. Another 118 bighas of land in Mandakata, which is a hill, can be also monetized on similar grounds. Moreover, The Procurement Policy of the Government of India which has a list of about 200 items notified to be bought from the SMEs only. Assam Government is currently working on a new procurement policy on the same grounds which will notify all Government entities to buy the listed items from the SMEs and not from any bigger brands or companies. The Make in India 1.0 is something that encouraged the people to make items themselves and become Atmanirbhar. Now the Government is going to come up with the second part of the story – Make in India 2.0, which talks about market linkage. Because only producing good quality items to have no buyers to procure them at the end of the day is an unviable business proposition.

The Government is the biggest consumer of products which can be anything from stationery to furniture for offices or even clothes for uniforms etc. If all these procurements are done from the SMEs then half of the problems are solved in terms of market linkages. Thus in terms of the procurement policy, when the corporations roll out a tender for procurement, then the local entrepreneur bidding for the tender will be given preference over any non-local entrepreneur. Even if the cost range is on the higher end compared to the latter, the local entrepreneur will get preference, probably not for the entire tender, but at least 20% of it will be given to them. What needs to be understood is that everything that goes out in terms of procurement is directly related to the life and death of the country’s economy. Thus preferring the local SMEs over bigger companies will only help us uplift the state economy and in turn, help them to survive.

When it comes to promoting local goods on a global platform, if the goods produced are exceeding in quality and style, the Government also has an Export and Logistics Policy in place, along with various tie-ups and one on one meetings organized to help them reach a global platform. Similarly, there is also a handicraft policy in making which will help the local entrepreneurs working in this sector to represent Assam on National and International platforms. However, the last mile connectivity is the marketing linkage locally, which can be only done through a strict notification of the Government under the Procurement policy which compels the Government entities to buy the listed goods only from local vendors.

According to Mr. Hilaly, new entrepreneurs will keep budding everywhere. ASIDC’s presence is only to support them wherever possible and not become a dependable arm for them to hold on to. The entrepreneurs developing new business ideas are all determined to set profits out of it with or without ASIDC. But being a Government entity, it becomes a duty to help them uplift themselves. Mr. Hilaly further gives us an insider view as he says, ASIDC has written to the DC office to allot more land to them, which can be used for commercial purposes for recovering the losses bored by the corporation and also help small industries set up. For example, the food parks set up in Amingaon, like the Wai Wai Company, Pran, etc. If such kind of help is provided across all districts of Assam, not only ASIDC will recover and start making profits but will also help more and more entrepreneurs to dwell up. This in turn will also contribute to the state’s economy at great heights as maximum employment generation happens through such SMEs themselves.

For now, ASIDC is eagerly waiting for the new Procurement Policy to be declared which will make life easier. Further, Mr. Hilaly suggests our readers who have the dream of becoming an entrepreneur read all the policies under the Government of Assam and India – be it the Export and Logistics Policy, the new EV Policy, the Industrial Policy of Assam, and get to know your entitlements. A lot of ideas have to be worked upon, a lot of risks might have to be taken, but the Government is here to support through and get better by the day in the process.