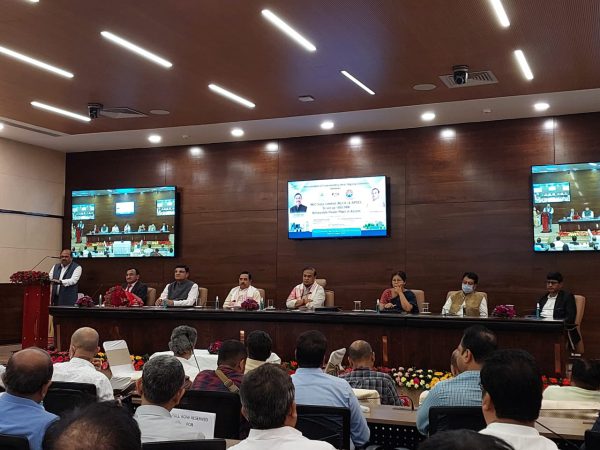 Assam is scaling up its efforts to generate more green power.

Under the MoU, the 1000 MW solar power plant to be set up in Assam will be a joint venture project on 49:51 ratio between APDCL and NLCIL to support the increasing power requirement of the state.

Speaking on the occasion, Chief Minister Dr. Sarma termed it a historic day for the state in the field of power generation.

He said that since power requirement in Assam is increasing by leaps and bounds, the state should be in a position to produce more power to fulfil its own requirement and at the same time staying benign with the climate change.

He said that once commissioned this solar power plant will serve the state in a big way by meeting its own requirement and helping Assam to contribute to Prime Minister Modi’s agenda of combating climate change by producing more renewable energy.

He also said that besides this 1000 MW solar power plant, the State government is ready to have another joint venture with NLCIL for yet another 1000 MW green power project. He also said that State government has a definite plan to reduce state’s dependence on fossil fuel and step up generation of green energy in the near future. He said that Assam should work to formulate a long term vision to plan the state’s growth and development.

Speaking in the event, Pralhad Joshi said that this initiative will boost the power sector in the State. At present the power demand in the country and also in the States is increasing due to rapid electrification. Asserting that India is the fastest growing and the best performing economy in the world, the Minister said that India needs to produce more power to fulfill its growth aspirations so that it can progress faster unhindered.

Joshi informed that the project is being developed with an investment of Rs. 5,000 crores and it is expected to generate around 1000 to 2000 persons in the state during the construction stage and more during the Operation and Maintenance stage.

Talking about coal production, Joshi said that equal importance needs to be given to thermal power. He informed that India today is producing 817 MT of coal.

NLCIL is a Navratna Government of India Enterprise, under the administrative control of Ministry of Coal. Today, the company has set its footprints in mode in the states of Tamil Nadu, Rajasthan, Uttar Pradesh, Odisha, Jharkhand and Andaman & Nicobar Islands.

Chief Minister Dr. Sarma also thanked Union Minister for Coal, Mines etc Pralhad Joshi for his help and leadership in enabling NLCIL to go for the joint venture with the State government in power generation.

He also thanked the Union Minister for his initiative in starting the operation of North Eastern Coalfields of Coal India Limited in Margherita.

Power Minister Nandita Gorlosa along with several other ministers, Principal Secretary Power Niraj Verma, CMD NLC India Limited Rakesh Kumar and host of other dignitaries were present on the occasion.