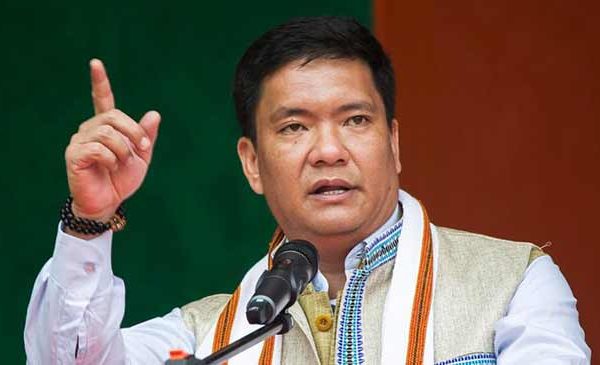 Itanagar: A meeting on a GIS-based drainage master plan was addressed by the Arunachal Chief Minister Pema Khandu for the Itanagar capital region on June 29th Tuesday at the Capital Complex. The meeting was held with an aim to deliberate on ways to mitigate flash floods and landslides often witnessed every year during the monsoons.

As declared by CM  Khandu “Construction of roads must include construction of drains along the road by the same executing agency and the contractor” Adding up that he also said almost 70% of causes for such floods are man-made and only about 30% are natural. He asked to take geographical and geological aspects of the region into account for the master plan. He also asked for a mechanism to be developed to stop rampant earth cutting, encroachment of natural streams, and disposal of garbage into drains.

Khandu also expressed his concern about the lack of accountability & lack of proper maintenance of completed projects due to the confusion in rules of business amongst engineering departments like urban development, PWD, RWD, PHED, WRD, etc.

He also directed the Chief Secretary to immediately bring clarity in business rules and roles of all such departments, especially those which have engineers in their payroll.

He stated that “The plan is a roadmap to ‘what we need to do’. But now we have to concentrate on ‘how to do’. This needs brainstorming and coordination amongst all stakeholders which include the Itanagar Municipal Council and the Smart City Project besides the line departments,” Keeping a focus on this, CM Khandu also directed the department to minutely go through the  GIS master plan on the drainage system in the capital complex, prepared by En-Geo Consultancy & Research Center, Guwahati. On the occasion, the Chief Minister has also presented a GIS-based Itanagar development master plan, a roadmap for the development of the capital region keeping in view the scenario of the next 25 years.