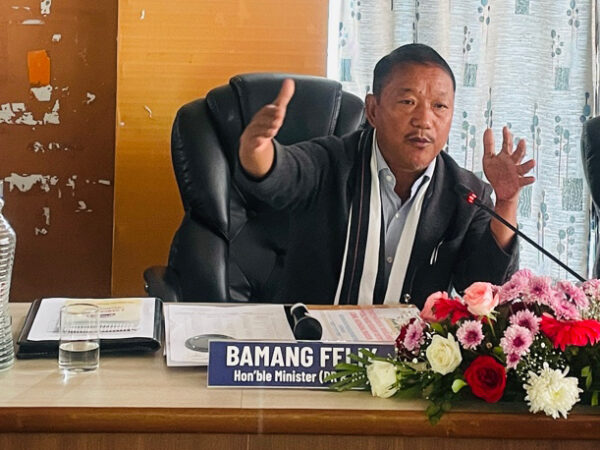 Itanagar: Bamang Felix, the Panchayati Raj Minister for Arunachal Pradesh, urged the department’s staff to make sure that the transfer of funds designated under the State’s Own Revenue (SOR) to the Gram Panchayats is finished by January 26 of the next year.

The Minister said that performance grants under the SOR fund will be paid to the performing districts solely based on their performance in the basic grants previously released on the last day of the two-day State-level coordination and review conference of 25 districts of the State.

Bamang Felix, who is also the State’s Minister of Rural Development, urged the Zila Parishad Chairpersons (ZPCs) and District Project Development Officers (DPDOs) to go above and beyond their responsibilities and take on the burden of making rural Arunachal a self-sufficient region.

Felix praised the ZPCs and DPDOs for faithfully carrying out their duties despite obstacles, but he also noted that some needed to pursue their goals with vigour in order to catch up with the majority of their peers.

He noted that the ZPCs and DPDOs needed to get capacity-building training, particularly in the financial and technical areas, which, he claimed, would help them carry out their tasks more effectively.

Felix praised the efforts and successes of the Arunachal State Rural Livelihood Mission (ArSRLM) in rural regions, particularly the advancements achieved in empowering rural women through SHGs. Felix also gave the ZPCs and DPDOs advice to provide the ArSRLM coordinators with any aid they can. The Minister urged everyone to always keep in mind that the welfare of rural Arunachal rests on their performances while expressing confidence that all obstacles could be addressed with appropriate coordination among all stakeholders, including the line departments in a “Team Arunachal” ethos.

Amarnath Talwade, the secretary for panchayati raj and rural development, praised the districts’ recent progress in his speech and urged everyone to keep up the pace of work for the benefit of rural people.

According to him, the State has been going through three major revolutions: the democratisation of grassroots stakeholders, the use of technology to provide transparency (such as PFMS, Geo-tagging, DBT, and the e-Gram site), and the empowerment of rural women.

Talwade said that the revolutions marked the start of a new chapter in Arunachal Pradesh’s transformation history and expressed his hope that the two-day event would act as a spur for stakeholders to work with more zeal and determination.

Performance reports on a number of central flagship initiatives, including Rashtriya Gram Swaraj Abhiyan (RGSA), Jal Jeevan Mission (JJM), Early Childhood Care and Education, progress on initiatives under the 14th and 15th Finance Commissions, and the status of financial grants under SOR to the State’s Panchayati Raj institutions, were reviewed and discussed during the event.