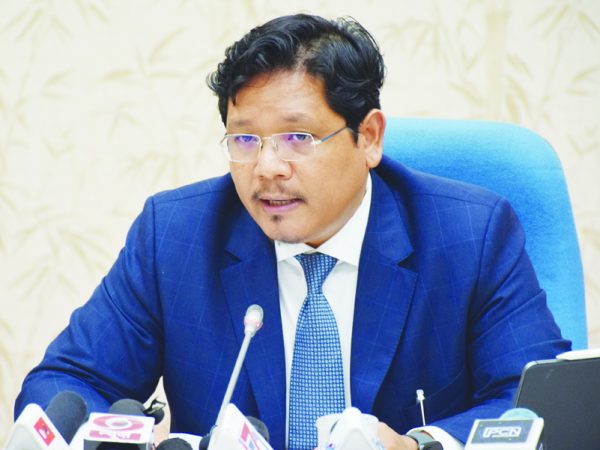 Tura, Meghalaya: The farmer’s community of Meghalaya has been promised commitment by Chief Minister Conrad Sangma which will help them engage through different programmes to comprehend their issues and concerns.

The CM Sangma’s visit to Songsak is to understand issues and problems faced by the people at the grassroots level and will formulate better programmes and policies that would benefit people.
The chief minister was also accompanied by the government chief whip, Marcuise Marak, and further informed that the government is leveraging the potentials of the farmers by adopting various beneficial initiatives for them.

“Prime Hubs are one such initiative of the state government to handhold our farmer-producer groups and agri entrepreneurs. Through this, the government will help the farmers to realize better incomes by providing them with better market credit linkages, technical know-how, and value addition to their products,” the chief minister added.

Prime Hubs will be set up across Meghalaya and also distributed cheques among the farmer-producer groups and each individual in the group is provided a financial aid of Rs 5,000 as seed capital. The chief minister, during the programme, informed that the government has earmarked a substantial amount for the farmer-producer groups. “SHGs and Nano enterprises can also avail interest-free loans from the initiative,” he added.

During the interaction, the SHGs and farmer-producer groups spoke about various problems being faced by them and highlighted issues were access to good markets for their produce, connectivity, finances, access to quality seeds and planting material, et al.
During the programme, select beneficiaries also petitioned the chief minister for more training on scientific management of plantations to which the latter assured of looking into it.
Conrad also distributed certificates to beneficiaries who completed a three-month training on masonry/plumbing at Bakdil Training Centre, Walbakgre Tura, funded by the Meghalaya Basin Development Agency.