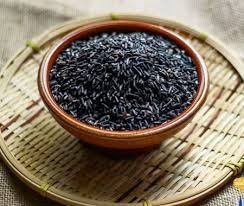 Imphal: The first consignment of black rice of one metric ton from Manipur has been exported to Europe on 12th August 2021. It has been amid COVID restrictions.

Black rice locally called chakhao is glutinous rice with a special aroma and high nutritious values that have been geographically indicated since May 2020. The black rice was exported to various European countries, stated by the Manipur Chief Minister during the flagging off event of the consignment.

This black rice or chakhao is sold at Rs 100-120 per kg in Imphal.
Similarly, organic ginger and pineapple are also being exported on regular basis under the aegis of Manipur Organic Mission Agency, Department of Horticulture and Soil Conservation.

Further, vehicles carrying quality seeds for distribution to villagers of different districts were affected by the destruction of poppy plantations due to the Govt.’s ‘War on drugs’ campaign. It will be distributed as alternative crops to the affected farmers to mitigate its adverse impacts.

The quality seeds including F1-cabbage, quinoa, and ginger meant for plantation on 460 hectares of land are being provided to villagers of Kangpokpi, Chandel Ukhrul, Tengnoupal, and Senapati districts.