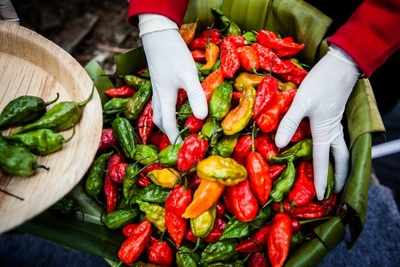 Nagaland: On 27 July, the first consignment of ‘Raja Mircha’ also referred to as King Chilli from Nagaland was exported to London via Guwahati by air for the first time.
In collaboration with APEDA the Nagaland State Agricultural Marketing Board (NSAMB), coordinated the first export consignment of fresh King Chilli.
The consignment of King Chilli or Bhoot Jolokia and Ghost pepper also considered as the world’s hottest is based on the Scoville Heat Units (SHUs) was originated from Tening, a part of Peren district, Nagaland.

The King Chili has been packed at APEDA assisted packhouse at Guwahati. It got GI certification in 2008.

The first-ever consignment of King Chillies from Nagaland will majorly boost the exports of Geographical Indications (GI) products from the north-eastern region and exporting fresh King Chilli was challenging due to its highly perishable nature.
Nagaland King Chilli belongs to the genus Capsicum of the family Solanaceae. Naga king chili has been considered as the world’s hottest chili and is constantly on the top five in the list of the world’s hottest chilies based on the SHUs.

Previously, APEDA had coordinated with NSAMB in sending samples for laboratory testing in June and July 2021 and the results were encouraging as it is grown organically.

Moreover, APEDA would continue to focus on the northeastern region and would carry out promotional activities to bring the North-Eastern states on the export map.
Also, in 2021, APEDA has already facilitated exports of Jackfruits from Tripura to London and Germany, Assam Lemon to London, Red rice of Assam to the United States, and Leteku ‘Burmese Grape’ to Dubai.