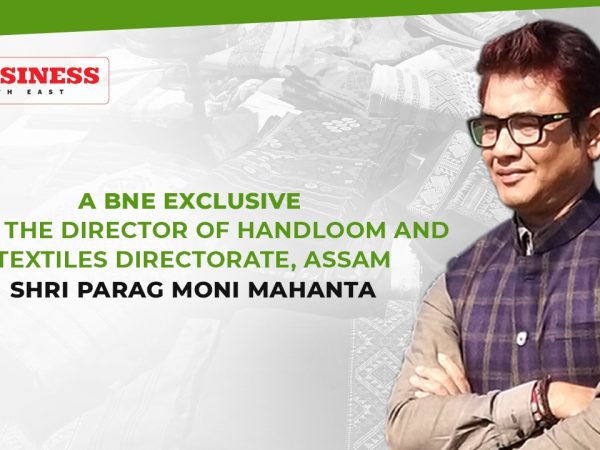 Are you aware that Sualkuchi of Assam is known as the Manchester of the East? The reason is quite obvious that it is world-renowned for Assam Silk. Assam ranks 3rd amongst raw silk-producing states contributing over 80% of Muga silk and over 60% of Eri silk produced in India. The state houses more than 13 lakh looms out of the total 28 lakh looms in the country.

It is not unknown that the Textile and Apparel industry is a critical contributor to India’s economy. As per a report published in the Times of India in 2014, the domestic textile industry contributes about 14% to India’s industrial production, 5% to the Gross Domestic Product (GDP), and a further 27% to the country’s foreign exchange inflows. But there comes a line that divides these industries into two sections – man-made and machine-made. Mass production of clothes and fabrics, under the organized sector, has taken a hit on the man-made section of the industry – i.e. handloom, which comes under the unorganized segment of the industry. Furthermore, the increasing fashion trends, designer wears, and labels leading the path along with rapid urbanization have also affected the industry. The overall consumer base has definitely led the apparel industry to grow which in turn is booming the country’s economy, but somewhere the traditional handloom sector is a little left behind.

Today’s feature of Business-North East, Shri Parag Moni Mahanta, ACS, Director of Handloom and Textiles, Assam, speaks candidly on the current situation of the handloom industry, the weavers of Assam, and the plan to revive them.

Mr. Mahanta takes pride when he mentions that Handloom is the second economy of Assam, specific to rural areas. It is a nature’s gift to the ones who can produce clothes in their own homes at their own convenience. And not to forget, it is self-sustainable. However, when it comes to running the state’s economy on the handloom, it gets challenging. Because weaving clothes from scratch is a skill-based job, it is not predominantly a full-time job that pays well at the end of every month. It is a laborious job, which requires 4 to 5 days at a stretch to produce one attire like mekhela chadar. And most of the time it is uncertain that time and cost invested into making an attire will be given back to the weaver with whatever profit possible. Thus there has been a constant push from the Government to make this industry commercial but lack of motivation among the weavers due to the lesser business available has been slowing it down.

On being asked about the business side, Mr. Mahanta very frankly addressed the rising rates of any silk attire. The cost of Muga Mekhela Chadars starts from INR 25,000/-. The lower ranges are mostly the simple ones. The ones meant for bridal wear goes beyond INR 50,000/- Even the cotton woven ones are beyond INR 5000/-. Except for the high-end people who have the capacity to spend, the majority of the consumers in Assam belong to middle-class families. For them, it becomes difficult to opt for such an expensive attire as frequently as they buy general clothes from a store. Now the question might come up that why these attires are so expensive to which

Mr. Mahanta brought forward the cost that goes behind making these attires. The silk yarn is bought at INR 6,500/- per kilo, which goes into making one pair of Mekhela Chadar. Then comes the making charges which include 4 to 5 days of constant work on the loom, making it obviously expensive. The weavers get approximately INR 20,000 per attire, which might seem a lot to someone from the outside. But one has to look into the hard work and laborious hours that go into making the attire. And after all, that, if the attire doesn’t get sold, then the payment of the weaver remains uncertain. Sadly, but truthfully, this system has entered a loop and we are trying to break through it, he further added.

Digitalization is perhaps one way that can help the handloom sector of Assam get a bigger grip on the global market. Assam silk is already quite famous across the globe, but the scope of selling them abroad on a regular basis is less. Mr. Mahanta reveals that he is currently working on opening an e-portal that will be a kind of one-stop solution to all the problems in the weaver’s community. The portal will have access to all the weavers working under the Directorate of Handloom and Textiles, the number of attires they produced, the update of their yarn-passbook, and also updated information on the running schemes and the beneficiaries. This portal will also have a segment on e-commerce which will open the industry to the global market. Thus it will not only help to keep a tap on the work being done by the weavers and supervision on the schemes being applied equitably while maintaining complete transparency but also provide a source of income for them.

It is unnecessary to stress how bad the pandemic must have hit these weavers. The question is what is being done to help them revive? To this, Mr. Mahanta told us about the scheme, Swa-Nirbhar Nari, that he has been currently working on. The scheme has been envisioned by our Hon’ble Chief Minister Dr. Himanta Biswa Sarma. The Director mentioned, through this scheme they want to remove the category of middlemen and directly reach out to the weavers. Up till now, around 1.23 lacs of weavers have been registered under the Directorate of Handloom and Textiles who has got a yarn-passbook.

Thus, under the scheme, 87 centres across the state will be set up to procure maximum of 100 numbers of gamusas, arunai etc per weaver. These centres will have two desks, one would be the procurement desk wherein the authenticity of the different types of gamusas will be checked and a barcode will be registered which can be tracked in the future through the e-portal he had mentioned. The second desk will be a billing desk where the weaver will receive the dedicated amount as cashless payment, against the number of gamusas procured from them. All the weaver needs is their yarn-passbook and the bank-pass book. The gamusas will be then sent to different centres from where the ARTFED and AGMC will take over and sell these gamusas through their dedicated stores. State Govt. has already sanctioned INR 80 Cr. Both the entities are allowed to earn 10% profit from selling the gamusas and an overall 10% will be budgeted out for administrative cost. 90% of the amount is to be returned back to the Government through the sales made.

State Govt. has set up Mulberry Yarn Bank at Sualkuchi where different types of silk yarn are sold at a subsidized rate. Earlier subsidized rate was 20%, but due to the pandemic, the subsidy has been increased to 30% till 31st March, 2022. Similarly, 33 cotton yarn banks have been set up across the State where cotton yarns are sold to weavers who have yarn passbooks. Earlier the subsidy was 30% and this year it has been increased to 50% till 31st March 2022, as per the initiative of the Hon’ble Chief Minister for relief of indigenous weavers.

However, the biggest challenge in this whole initiative would be to make sure that the prices these gamusas are sold in are maintained across the state as there can be chances of malpractices. Regular meetings are being done to decide a benchmark for the size, type, quality and price of the gamusas, to maintain uniformity and transparency across the state.  Having said that, the primary motif here is to make sure the weavers receive immediate relief and that will be catered to instantly. The scheme has been announced officially, and the details of the execution are currently under process.

Now these are yet to be materialized, what would excite one more is the upcoming Integrated Handloom Park at Kaziranga. It is currently at the very initial stage of production, covering 25 bighas of land near NH 37 in Bongaligaon touching Kohora and Agaratali range. The vision of this project is to promote weavers, designers, and entrepreneurs of the Handloom sector in Assam and thus give them a National and International platform through the tourists who visit the Kaziranga National Park. The place will consist of retail shops, an exhibition area, a Handloom museum, and even an open-air theatre. There will be a residential zone which will comprise of Guest houses, Weavers hostels, dormitories and staff quarters and of course, a recreational zone with a restaurant and food court. The work has started at God’s speed and we hope to experience this piece of beauty and wonderment filled with the heritage of Assam soon enough.

These are just two of many schemes evolving under Directorate of Handloom and Textiles.

To know more on upcoming schemes, stay tuned to our website, Business-Northeast