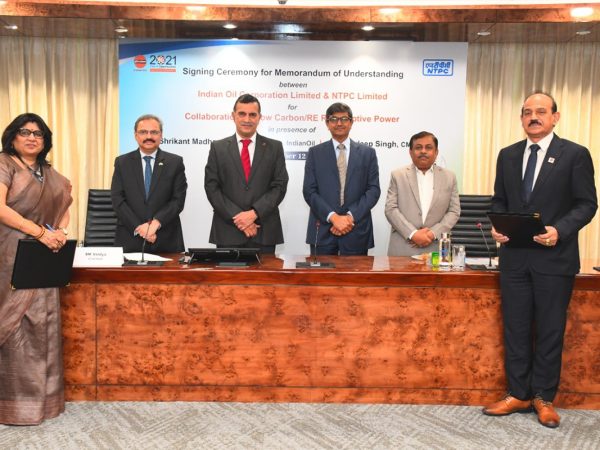 Speaking on the occasion, Mr. Shrikant Madhav Vaidya, Chairman, IndianOil, said, “As a global energy major, environmental priority is being weaved into every business aspect of IndianOil, and now, we intend to use green energy to power new projects and refinery expansions.”

IndianOil and NTPC have come together for the generation and storage of renewable energy or other cleaner forms of energy, including gas-based power, primarily to cater to IndianOil Refineries or other installations.

IndianOil has plans to scale up its portfolio of renewable energy with solar, wind, etc., for refinery operations, thereby reaffirming its commitment towards environmental sustainability and reduction of carbon footprints. IndianOil plans to meet 85% of the power requirement for new projects in its refineries primarily from renewable sources in the near future. IndianOil is also well poised to leverage India’s sustainable commitments through multiple green initiatives, including increased use of natural gas in all refineries, ethanol-blended Motor Spirit, sale of Compressed Biogas (CBG), and production of biodiesel using cooking oil as feedstock.

IndianOil’s R&D team has undertaken various pilot projects in the field of solar power, solar thermal, and solar hydrogen and has been leading India’s foray under the Government of India’s National Green Hydrogen Mission.