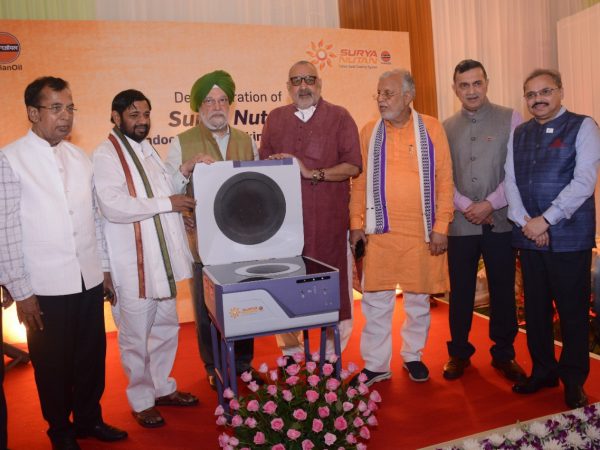 Guwahati: IndianOil and the Ministry of Petroleum and Natural Gas have developed an indigenous solar cooktop named “Surya Nutan” with the goal of developing a viable solar solution to power kitchens.

The innovative solar cooking system, designed by Indian Oil’s Research and Development division, is presently being tested in 60 locations around the nation, with plans to scale it up soon.

During the demonstration, Hardeep Singh Puri, the Minister of Petroleum and Natural Gas as well as the Minister of Housing and Urban Affairs, stated, “This is a revolutionary step, a complete paradigm shift.” The business sector will join in if the idea is successfully implemented and commercially exploited. Because there are so many households, the cost will be reduced.”
“Testing is being conducted in 60 locations.” Following that, in the next two to three months, commercial exploitation on a big scale. “Not only in India, but if this proves to be a viable product for residential and industrial kitchens, it may be used outside the country,” Puri added.

The solar cooking device has been patented by Indian Oil. According to SSV Ramakumar, Director of Research and Development at Indian Oil, the cooktop may remain indoors, in the kitchen. It contains a thermal battery that stores heat. “The insulating material was carefully chosen to minimise heat loss,” he explained.

The system may be heated by electricity when the sun is not shining. Ramakumar went on to say that the cooktop is powered by a 750-watt solar panel and has an efficiency of roughly 80%.

“A household consumes eight cylinders each year.” Saving one kg of LPG reduces greenhouse gas emissions by three kgs. We plan to expand in the next three months. If subsidies are available, it can be manufactured for around Rs 10,000 to Rs 12,000,” Ramakumar stated.”

This newly introduced solar cooktop has the ability to revolutionize our energy security scenario, as India currently imports 50% of its LPG consumption. It also significantly cuts India’s CO2 emissions and protects our residents from the whims of volatile foreign fossil fuel costs.

The launch of ‘Surya Nutan’ follows a series of other steps taken by the Ministry of Petroleum and Natural Gas in response to the current global energy crisis, including increasing ethanol blending to 20%, increasing the procurement price of compressed bio-gas under the SATAT Scheme from Rs 45/kg to Rs 54/kg, drastically increasing the area under exploration and production to 15% of the geographical area from the current 7-8%, and aggressively pursuing Green Hydrogen Mission in our refining.

• Surya Nutan is a Stationary, rechargeable, and always kitchen-connected indoor solar cooker.
• This is a patented product designed and developed by IndianOil R&D Centre, Faridabad.
• It offers an online cooking mode while charging from the Sun which maximizes the system efficiency and ensures high utilization of energy from the Sun.
• It works on a Hybrid Mode (i.e. can work on both solar & auxiliary energy source simultaneously) which makes the Surya Nutan a reliable cooking solution for all weather conditions.
• Insulation design of Surya Nutan minimizes radiative and conductive heat losses.
• Surya Nutan is available in three different models: The premium model (Breakfast +Lunch+Dinner) of Surya Nutan can cook all the meals for family of four.
• Initially, cost of the product is around Rs 12,000 for base model, and Rs. 23,000 for Top Model. However, the cost is expected to reduce substantially with economies of scale. At a price of Rs. 12,000-14,000/- for Top Model, assuming annual consumption of 6-8 LPG cylinders, this product can pay back the buyer in the first 1-2 years itself.
• Surya Nutan can be used in all weather and seasons including when the Sun is not available for long durations or for continuous days, such as monsoons and extreme winters.
• All the safety aspects required in any indoor appliances are inbuilt in Surya Nutan.
• Surya Nutan is a low maintenance system and the product has a long life.
• Surya Nutan is a modular system and can be designed in different sizes as per the requirement.
• With the above features, “Atmanirbhar hote Bharat ki Nayi Udaan Surya Nutan banega Kitchen ki Nayi Pehchan”