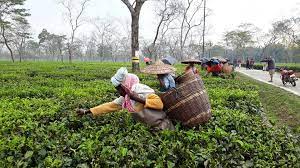 Jorhat Assam: Workers of 32 Tea Garden under the Mariani Constituency have urged the Minister for Power, Cultural Affairs, Sports, Youth Welfare and Tourism, Bimal Borah to waive off interest against their unpaid power bills.

A discussion was held on 18 July 2021 between Bimal Borah and the representatives of 32 Tea Estate’s workers of Mariani Constituency at the public hall of Hunwal Tea Estate at Mariani for waiving off interest against their electricity bills.

The installment system has been asked by the tea garden workers for the payment of their pending electricity bills to the APDCL, one of the officials said. The minister will however look into the matter.
Further, they have stated several other matters related to electricity along with a series of measures initiated by the government.

During the meeting, former Mariani MLA Rupjyoti Kurmi was present along with senior APDCL officials.

The minister previously has interacted with a few of the worker’s families of Hunwal TE regarding any issues and also met Nagaland Minister for Higher Education and Tribal Affairs, Temjen Imna Along at Mariani this Sunday, 19 July 2021.