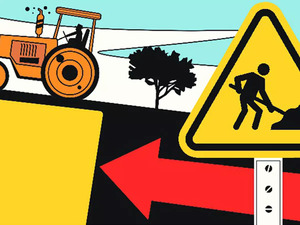 National Highways Authority of Indi. (NHAI) will launch its maiden Infrastructure Investment Trust (InvIT) on 29 October, with which it aims to mop up Rs 5100 crore, as part o the government’s long-term plans to monetize road assets.

NHIT InviT will hold the five toll road assets of 390 km, spread across Rajasthan, Gujarat, Telangana, and Karnataka. The assets have estimated revenue of P500 crore in FY22

According to the offer documents submitted with NSE, the issue will be opened on 29 October and closed on 2 November. The road assets which will be brought under the InvIT have an enterprise value of Rs8000 crore, where debt will be Rs2000 crore.

NHIT InvIT will hold the five toll road assets of 390 km, spread across Rajasthan, Gujarat, Telangana, and Karnataka. The assets have estimated revenue of Rs500 crore in FY22.

NHAI plans to increase the size of its proposed InvIT and is expected to raise as much as 15,000 crores in two rounds, ET had reported earlier.

India’s biggest superannuation funds manager, the Employees’ Provident Fund Organisation (EPFO), is also said to have been approached for investment into the InvIT’s units. Several top mutual funds have also been approached to buy into units of the InvIT.

This will be the second InvIT in the country to be floated by a public sector company after PowerGrid Corporation of India (PGC) raised about Rs 3,480 crore in April.

Rating company CARE gave a provisional triple-A (AAA) grade to the National Highway Infra Trust (NHIT) in April. “The assigned rating factors in the experience and established track record of the sponsor of the trust in the road sector and its importance to the government as a proposed vehicle for monetization of road assets,” CARE said in a note.

As part of the monetization programme announced by the government, NHAI plans to sell about 32 more operational road assets spanning 1,500 km as well as upcoming ToT (toll operate transfer) projects.

Infrastructure trusts, or InvITs, are popular among investors in long-term revenue-generating assets such as toll roads and power-transmission projects. Since the operating infrastructure assets provide stable and long-term yields under the InvIT structure, global investors remain aggressive on trusts floated by domestic entities.

According to a recent report by India Ratings & Research, another Rs 25,000 to Rs 40,000 crore of probable assets are expected to hit the InvIT market in the next six to eight months as it has emerged as a viable option for de-leveraging the balance sheet.