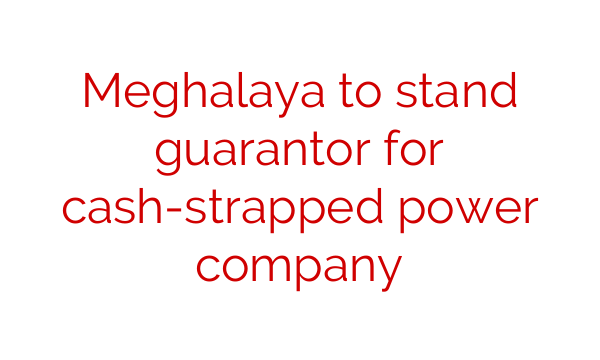 Shillong: During the Cabinet Meeting on Wednesday, after being pressurized from various quarters, a decision was taken where the Meghalaya Government will be taken into account as a guarantor for the “Atma Nirbhar” loan that the Meghalaya Energy Corporation Limited (MECL) has taken from the Central Government. But with certain conditions only it will consider MECL.

This decision was taken to bail out the Sate-Owned power utility company.

A decision was taken after the Cabinet Meeting on Wednesday, that instead of 25 percent, a support of 100 percent budget will be provided for the loan by the Central Government only after getting a proper commitment from MECL.

MECL has sought Rs 1,345 Crore from the Centre through the State-Owned finance Companies, Rural  Electrification Corporation (REC), and Power Finance Corporation (PFC). Although, the first quota of the loan has been fulfilled with repayment of power purchase bill of NEEPCO, NTPC, etc. And now certain rules have been set with the second tranche of loans that, either the State Government stands as a guarantor or can be a distributive allotment to franchises.

But this new rule of distributive allotment of loans in two circles to the franchises has been rejected by the employees of MECL and Power Department and instead have opted for the State Govt to stand as the loan guarantor entirely.

Meanwhile, CM Conrad Sangma harped upon the MECL reforms and mortgages of some Government assets.

Following the new decision, the state government needs to keep a budgetary provision of around Rs 150- 200 crore annually.