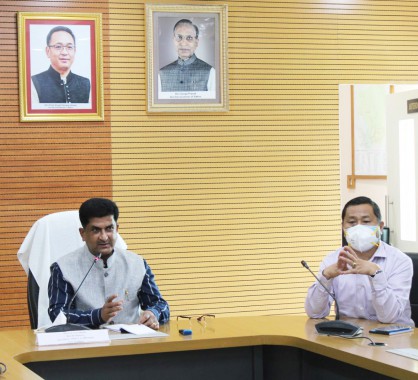 During the meeting, the minister stated that the State government has made every effort to strengthen the rural economy in the state through various schemes and programmes, emphasizing the importance of raising widespread awareness about these schemes so that the benefits reach the people on the ground. Sharma further recommended that the recently adopted Mukhya Mantri Krishi Atmanirbhar Yojana be widely promoted among farmers, to meet the goal of providing farmers with recognized financial incentives. He also urged line departments to work together and actively cooperate to ensure that the farming community across the state benefits.

He further recommended that the concerned department conduct a special training programme for field functionaries such as Agriculture Development Officers, Horticulture Development Officers, views, and other authorized officials to educate and inform the farming community. He emphasized the importance of agriculture, horticulture, and animal production, and predicted significant growth in rural areas.

The minister asked the Information and Public Relations department to raise awareness of the government’s numerous initiatives and urged that success stories be widely publicized so that farmers might be motivated and encouraged. He stated that after the Soreng-Chakung constituency, the programme will be held for Temi-Namphing and Namthang-Rateypani seats in the south district.

The meeting was followed by an interactive session in which the attendees discussed the availability of farming inputs to be distributed to farmers in the future programme. Farmers will be given a variety of inputs such as a power tiller, chaff cutter, community water tank (steel water tank), Flexi water tank, fabricated greenhouse, floricultural inputs, livestock under the rural backyard goat, sheep, and piggery scheme/National Livestock Mission, and so on.