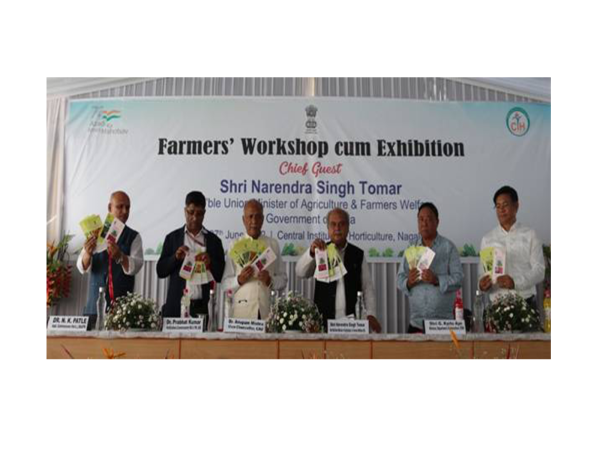 Guwahati: Union Minister for Agriculture and Farmers’ Welfare, Narendra Singh Tomar, said that Nagaland is rich in horticulture and the products have the potential to be exported from the state. He also pushed for the rearing and marketing of Mithun in Nagaland.

Speaking at the Central Institute of Horticulture at Medziphema in Nagaland on Sunday, June 26, Tomar said that the Center and states are together engaged in the holistic development of the Northeast region.

The Union Minister also advised that farmers should better the quality of their products as per global standards for expanding export, which will ensure better income. It will also contribute more to the country’s GDP. He added that the Northeast region has the potential to bring a new revolution in the horticulture sector.

He said that by virtue of six agro-climatic zones with vast geographical variations present in the NE, and Nagaland in particular, it has the potential to provide considerable scope and advantages for growing many horticultural crops as compared to other states of India.

Tomar stated that the income of the farmers must be increased in Nagaland through high-value crops, connectivity, and bringing in new technology through institutions. He appreciated the efforts of the Central Institute of Horticulture in contributing to the improvement of the sector in Nagaland.

Later, Narendra Singh Tomar visited the National Research Centre on Mithun in Nagaland. he said that Mithun, scientifically known as Bos frontalis, is a unique bio resource of the NE, and urged the farmers to adopt Mithun rearing under the semi-intensive system developed by ICAR-NAC.

The institute was urged to take up research to explore the development of business models to market the nutritional and therapeutic properties of milk and the fertilizing capacity of Mithun dung and urine.