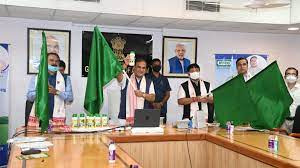 Guwahati: The first consignment of Nano Urea, developed by Indian Farmer’s Fertilizers Cooperative Limited (IFFCO) has been flagged off virtually by Assam Chief Minister, Himanta Biswa Sarma at a virtual conference held at the Chief Minister’s office on 6th August 2021.

IFFCO for the very first time has developed nano urea in the world which will substitute a major portion of conventional urea.
It will be a game-changer in the history of modern agriculture across the globe considering its positive benefits, stated by Assam CM during the virtual conference.

Himanta Biswa Sarmah, the Chief Minister of Assam had urged IFFCO to set up a Nano Urea plant in Assam to cover up the shortages of fertilizers in the state.

So far, the Govt of India has spent about Rs. 55,000 crore towards subsidy for only urea during the FY 2019-2020 according to the unique vision for farmers by PM of India.
In a way, Nano Urea will save a huge amount of money from the public exchequer. The cost of transportation, handling, and warehousing will be reduced substantially.

Further, the Assam CM thanked IFFCO for sharing Ltd’s valuable technology with other PSUs for the common farmer’s benefit.