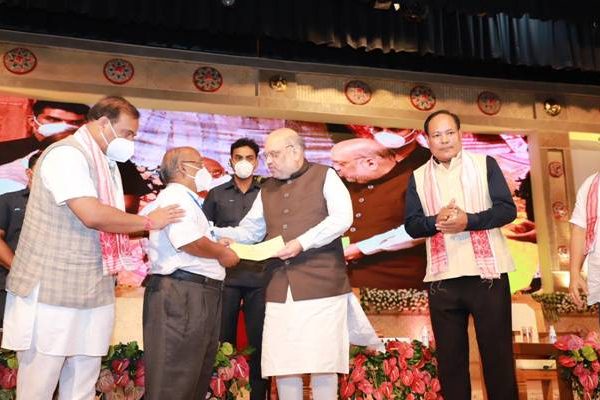 Guwahati: On 25 July 2021 Sunday, Union Home Minister Shri Amit Shah inaugurated several development projects at Guwahati Assam.
The Radio Therapy Block and the new LINAC machine at the State Cancer Institute located at the Guwahati Medical College and Hospital (GMCH) was inaugurated by Union Home Minister, while at a ceremonial programme marked to distribute the financial assistance to 100 beneficiaries under the ‘Prarthana Achoni’, organized at the Srimanta Sankardeva Kalakshetra, Amit Shah inaugurated the schemes leading to the development of the state. Shri Amit Shah also laid the foundation stone of Tamulpur Medical College, which had been announced during the Bodo Peace Accord. The Chief Minister of Assam, Shri Himanta Biswa Sarma, Speaker of the Assam Legislative Assembly, Ministers of the Government of Assam, Chief Executive Officer of the Bodoland Territorial Region (BTR), and senior officials of the State Government were also present in the programme.

While addressing the event, Shri Amit Shah said that, with the formation of government in Assam for the 2nd time, the strength can be clearly seen among the people who are determined to remove agitation, give up weapons, and terrorism to move forward in the path of development.
It was noted that, for the very first time, 5 cabinet ministers have been included from the Northeast under the leadership of Shri Narendra Modi, and the participation of Northeastern people will help enhance the nation’s development.
Shri Shah said that the different types of dialects, culture, languages, songs, and music and variety of cuisines of the entire North-East are not only a jewel of the North-East but of India as well.

21 medical colleges are being set up in the state by the Government of Assam under the leadership of Modi, a huge achievement when compared to the population ratio in other states of the country.
Further, Shah stated that North-East would be benefited from the establishment of a cancer hospital in Assam. The cancer research papers prepared by the students here will be referred across the country and abroad. Shri Shah said that Tamulpur Medical College is being set up for the benefit of the people, and informed that the entire agreement signed with Bodoland will be implemented before 2024 and all the promises made with Bodoland will be fulfilled by the 75thyear of Independence. The agreement with Bodoland has been implemented up to 90 percent. Under the Bru-Reang agreement, the work of giving land in 9 out of 14 places has been completed and before 2022, more than 35,000 Bru families will get land for the first time after 35 years, food grains, ₹ 4,500 pensions, and also honor.
Before 2024, the entire North-East will move away from terrorism and agitation and walk on the path of development.

Shri Amit Shah moreover mentioned that many infrastructure works are going on in Assam, which needs to be accelerated more rapidly. Referring to several ongoing projects for health, Shri Shah said that 15 PSCs have been started inside tea gardens. Shri Shah said that the Prime Minister has set the narrative that for development, cooperation and hard work are needed, and no agitation, the people of Assam have realized it.