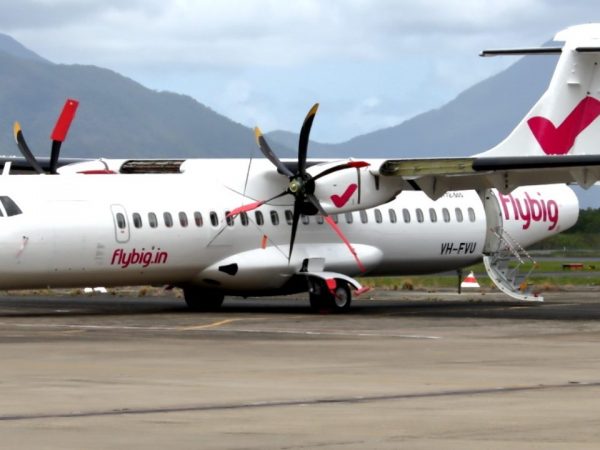 Itanagar: To boost the commercial activities and proceedings via air, a new route connecting Guwahati, Assam with Arunachal Pradesh’s Tezu on Thursday, a private airline Flybig launched its operations on the new route to power the air connectivity under the Regional Connectivity Scheme -UDAN, expanded further in the hilly northeastern region, officials said.

A water cannon salute was accorded to the first flight at the newly developed Tezu airport, where a new terminal building spread across an area measuring 4,200 sq mt, a runway, and a new Air Traffic Control tower is being developed at a cost of Rs 140 crore.

On 19th August 2021, Thursday, the Arunachal Pradesh Chief Minister Pema Khandu flagged off the first scheduled flight of Flybig Airlines from Tezu Airport in Lohit District to Guwahati, Assam in the presence of state’s Aviation and Tourism Minister Nakap Nalo, and AAI’s Regional Executive Director Ravi Kant, among others.

Ravi Kant said that the AAI has always been pivotal in connecting the remote and small places through air transportation, and the expansion of air connectivity in the northeastern states would boost tourism and trade in the region.

The ATR-72 type aircraft of the FlyBig would operate on the Guwahati-Tezu-Guwahati route every Tuesday, Thursday, Saturday, and Sunday.

In order to reinforce its network, the airline is adding two new aircraft to its fleet in September and another two in October, which would be stationed at Guwahati and Indore hub. The flight fares would be lesser than the normal flight rates, an AAI official informed.

The AAI at a cost of Rs 650 crore is also developing the Hollongi airport near Arunachal capital Itanagar, to boost air connectivity in the mountainous areas.

Moreover, the operationalism of tezu airport connectivity of Eastern Arunachal will have a boost to facilitate easy and accessible economic activities, business, trade, and health services, since Arunanchal shares international borders with Bhutan, Tibet-China, and Myanmar.