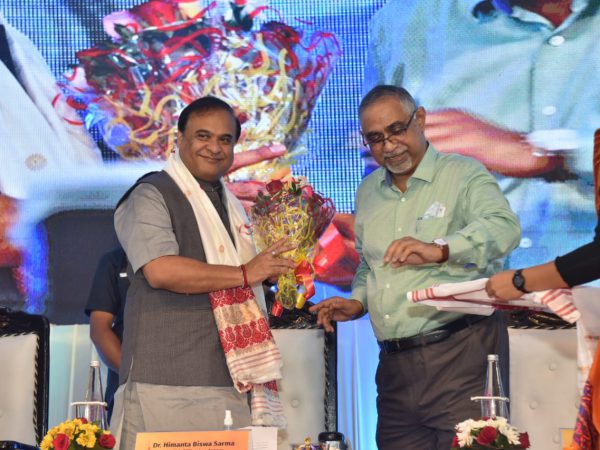 Guwahati: Oil India Limited chairman and managing director S C Mishra today said there is no shortage of fuel in the country. Speaking exclusively to Business Northeast, OIL CMD S C Mishra, who was in Guwahati today on the occasion of the setting up of a Guwahati Office of Oil India Limited and Skill Development Institute,

“Nobody has control over prices.” And we have not taken any action in this regard till now. It depends on the marketing companies. However, there is no shortage of fuel in India to date, “Mishra told BNE.

In fact, the petroleum ministry has also said the production of petrol and diesel in the country is sufficient to take care of any demand surge. ” This unprecedented growth has created temporary logistic issues at the local level,” the ministry said in a statement.

Oil India Limited conducted the foundation stone laying ceremony with the unveiling of a plaque for the construction of its Guwahati Office and Skill Development Institute at Bamunimaidan, Guwahati.

The plot of land where the construction of the buildings will be done was allotted to Oil India Limited by the Government of Assam through a long-term lease. The process for setting up a Guwahati office of Oil India Limited and a Skill Development Institute has started in right earnest and pre-construction activities have been completed to a large extent.

Mishra said the future plans of the company for City Gas Distribution (CGD) projects are bright.
Oil India Limited and GAIL Limited have already partnered with the Purba Bharati Gas Pvt. Ltd. (PBGPL) and the Assam gas Company Limited has already started laying some pipelines for the CGD project, and one CNG (Compressed Natural Gas) station is expected to start by October or November this year.

Assam Gas Company has got one district for laying pipelines after bidding. “Oil is entering Tripura also with CNG pipelines,” he said.

On diversifying into the renewable and alternate energy sectors like wind and solar, he said: “We have already installed over 180 MW of wind energy projects and 14 MW of solar energy projects.” We are working towards a green hydrogen economy that will benefit the environment. India’s first 99.999 percent pure green hydrogen pilot plant was installed at its Jorhat Pump Station in April this year.

On its highest ever quarterly net profit of Rs 1,630.01 crore for the January-March quarter, Mishra said the company had given out very good dividends last year. We rolled out Rs. 15 per share as a dividend.