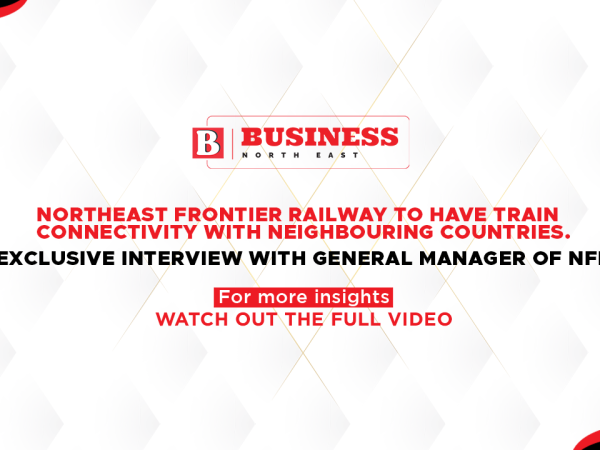 1. Railway connectivity on the cusp of a sea change in the North Eastern Region

Railway connectivity in the North Eastern Region is on the cusp of a sea change with a slew of projects being lined up by the NorthEastern Frontier Railway  (NFR) to include maximum places in the region under the railway map of India.

2. NFR is undertaking a number of developments in the Northeast. Please give us sector-wise progress of Railways in the region

Anshul Gupta: Northeast has a very special role in the development of this country and the Railway has a prominent role in the region’s development. There is an overall growth in all sectors of NFR. To give it sector-wise, with regards to freight revenue NFR loaded 10 million tonnes of outbound freight and unloaded 13 million tonnes of inward freight in the FY 2021-22.

With this growth rate, NFR is expecting 15-20 million tonnes of outward traffic and around 15 million tonnes of inward traffic in the next 2-3 years. The inward freight includes automobiles, electronics, consumer goods, and food grains. We have also started loading and moving coal, dolomite, and stone from the NE.

Roll of Railways in the development of the NE is not limited to goods traffic, but we are also primarily focused on passengers, parcels, and tourism; we are working with various state governments and private agencies on these sectors.

Year-on-year the highest growth is seen in the parcel segment across India, but especially in this region. Considering that we are developing nearly 29 parcel terminals under NFR. One such world-class terminal is coming up at Agyathuri in Guwahati.

We are planning to introduce more modern coaches. Gradually the old coaches are being replaced with the Linke Hofmann Busch (LHB) coaches. Further, new train services will be introduced to the state capitals; in fact, few will start service very soon. Plans are also being made to introduce five Vande Bharat trains in the NE in the next couple of years.

In tourism, the five Vistadome services have done wonders for the industry, especially in Haflong and Alipurduwar. In these places, the dying tourism sector was revived because of Vistadome. We will also introduce these coaches in Manipur as soon as connectivity is made.

3. What is the present status of the undergoing Railway connectivity work to the other NE states?

Anshul Gupta: Our main focus is to connect the state capitals. In the last year, there has been good progress. NFR did face some set back in land acquisition in Nagaland, but that has been sorted and work is underway. We are trying complete connectivity to Pherima in Nagaland by March-April 2023 and will reach further to Kohima by March 2026. It will take around 3-4 years to provide world-class architecture, considering the terrain.

Connectivity to Aizwal in Mizoram and Sikkim will be done by December 2023, and further survey is going on till Gangtok in Sikkim. In Shillong, the issues are being resolved with the help of the Meghalaya government and other stakeholders, and work should resume soon.

4. Your views on the Trans Asian Railway that is most essential for industrial development.

Anshul Gupta: We have opened one international link to Dhaka from New Jalpaiguri in the freight and coaching sectors. NFR intends to open two more this year- one from Mahisasan to Shahbajpur in Bangladesh, and the second one from Agartala to Akhaura. These will be a big boost to economic activities in the two countries. The railway is in talks with the High Commission of Bangladesh to improve connectivity further.

Work is also on for connecting with Nepal. In the first week of July NFR, we will open the NE first connectivity to Nepal and start freight train services. Sanctions have been made for surveys from Kokrajhar to Gelephu in Bhutan. We are hoping to complete this construction in the next two years.

5. Is there any plan to introduce private trains in NFR?

Anshul Gupta: There is already a scheme by the Ministry of Railways for private trains. The decision needs to be made on which sector these are to be introduced. NFR has also made certain proposals. These are as per the business model which any private entity would want. We will definitely get a green signal from the Union Ministry.

6. NFR has seen major destruction of infrastructure in Dima Hasao due to the floods. There are reports on media relating the destruction to faulty planning on the part of Railways. Has NFR estimated the total monetary loss? What is the plan ahead?

Anshul Gupta: This year the fury of the rains has been very harsh. It has caused major damages to not just the tracks but also other assets, which was unprecedented. Railways will be investigating and making a report on how this disaster could have been prevented. Presently we are working on war footing to restore at the earliest.

The Centre’s allocation of Rs. 180 crore is for emergency restoration, but the quantum of damage is very high. But in the long run, we are looking into an alternative alignment so that in case of such calamities in the future, the traffic is not hindered.

A survey has also been sanctioned from Lanka to Chandranathpur, which will not pass through the hill section. The study is also conducted in collaboration with renowned institutes on the soil and the strata of the region for improved services through Haflong.

7. NFR has started the electrification of tracks on Deepor Beel despite protests. What is your opinion in this regard?

Anshul Gupta: The protestors can give us better suggestions rather than electrification if any. There is no record of elephants dying of electrocution in railway tracks neither in India nor abroad. The overhead equipment are much higher where elephants cannot reach.

NFR has also written to NGT that we plan to elevate the track around Deepor Beel, not just the new one but also the existing track through a viaduct. This will be the first such viaduct through such terrain. AN estimate of around Rs. 800 crores have also been placed for 3 km of elevated tracks.

Chief Minister Himanta Biswa Sarma has also proposed to elevate the highway and we are considering combining both the rail tracks and the highways through a single elevated path.

Protests are never good for the development of any country. Railways also want to protect the wildlife and we are offering solutions.  We have taken numerous steps to protect the flora and fauna.

8. What is the status of the second Railway bridge that was proposed to be constructed over the Brahmaputra in Guwahati?

Anshul Gupta: The survey has been completed and submitted to the Railway Board. We have received in-principle approval and the final sanction and fund allocation.

For design and other aspects, we have collaborated with Brahmaputra Board. Once these are in place, the second bridge near Saraighat will be completed within two years.

9. Is there any plan to construct a passenger terminal in Guwahati?

Anshul Gupta: We are working on having a world-class station at Kamakhya. Following that, a ropeway is being planned from Kamakhya Station to the Kamakhya temple and a separate link connecting to the airport.

Guwahati station is included for further upgradation. The second entry end to the station at the Panbazar is at an advanced stage with the Assam government. We need land.

At New Guwahati and Agyathuri, we are building modern coaching stations.

Other 11 stations are being developed across the other states as well, and more stations are in the process of being identified.

10. Many inter-city passenger trains have been canceled and passengers have been opposing this move of the NFR.

Anshul Gupta: We have restored most of the cancelled trains. But the few that continue to remain cancelled are because of the very low demands. NFR is here to serve the public but such trains with very low demand is incurring NFR losses and also impact the running of other trains as well.

We will be accessing the demands further and introduce more trains accordingly.