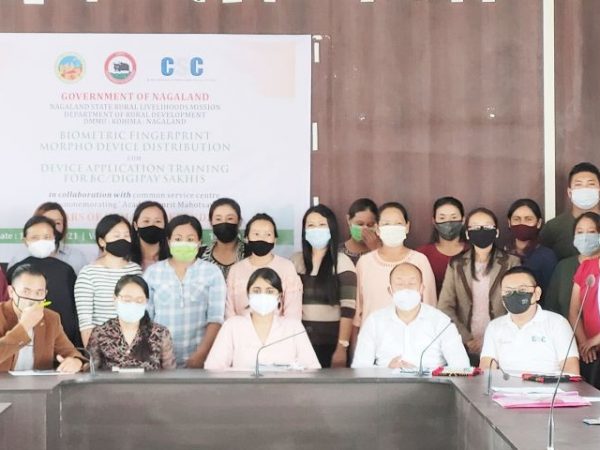 In the commemoration of Azadi Ka Amrit Mahotsav, the distribution was done at a function in the morning hours.

While addressing the occasion the ADC of Kohima, N Bhavani Sri acknowledged the NSRLM for engaging the women in the financial inclusion activities which is a part of women empowerment.
Previously, the state Program Manager Financial Inclusion SMMU, NSRLM stated by highlighting the Digipay Sakhi that, digital finance is a key intervention under financial inclusion where India Plans to deploy BC in all Gram Panchayat under “Mission one BC One GP”.
The Morpho Device is being distributed to 27 Women Area Co-ordinator Financial Inclusion of seven blocks under Kohima District would provide financial transaction services at their doorsteps for the convenience of the villages which could be run at home or common service center – Digipay Sakhi.
The device utilization was briefed by Lanusosang Jamir, State Head Common Service Centre, followed by the training and activation of the Morpho Device.