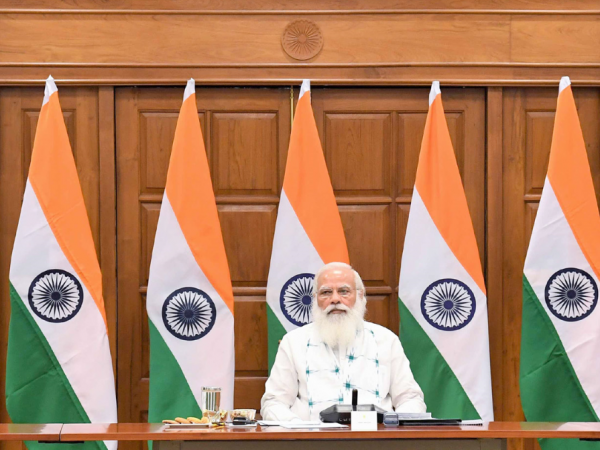 Gujarat: On the 16th of July, Friday 2021 via video conferencing Prime Minister Narendra Modi will inaugurate and dedicate to the Nation several key projects of the Railways in Gujarat. He will also inaugurate the Aquatics and Robotics Gallery, and Nature Park in Gujarat Science City during the event. The projects include the newly redeveloped Gandhinagar Capital Railway station, gauge converted cum electrified Mahesana – Varetha line, and the newly electrified Surendranagar – Pipavav section, a note from the Prime Minister’s Office said.
PM will also flag off two new trains i.e Gandhinagar Capital – Varanasi Superfast Express and MEMU service trains between Gandhinagar Capital and Varetha.
For Rs 71 crore the up-gradation of Gandhinagar Capital Railway station has been done. World-class amenities in the station have been provided at par with modern airports. Special Care has been taken to make it a Divyang friendly station by providing it with a special ticket booking counter, ramps, lifts, dedicated parking space, etc. The complete building is designed and provided with Green Building rating features. The state-of-the-art external façade will have daily theme-based lighting with 32 themes. The station will also house a five-star hotel.
PM will also dedicate Mahesana – Varetha gauge converted cum electrified broad gauge line (including Vadnagar station) to the nation. The Mahesana – Varetha Gauge conversion of 55 km has been completed for Rs 293 crores along with the electrification work for Rs 74 crores. It has a total of ten stations with four newly developed station buildings viz. Visnagar, Vadnagar, Kheralu & Vaartha.
A major station in this section is Vadnagar, which has been developed under Vadnagar – Modhera – Patan Heritage Circuit. Vadnagar station building has been designed aesthetically using stone carvings, and the circulating area has been provided with landscaping. Vadnagar will now get connected through a broad gauge line and passenger and goods trains can now be run seamlessly on this section.
Electrification of Surendranagar – Pipavav Section is another project that will be dedicated to the nation. The project has been completed at a total cost of Rs 289 crores. The project will provide seamless freight movement from Palanpur, Ahmedabad, and other parts of the country up to Pipavav Port without any change of traction. It will also decongest Ahmedabad, Viramgam, and Surendranagar Yards due to avoidance of detentions for loco change over.