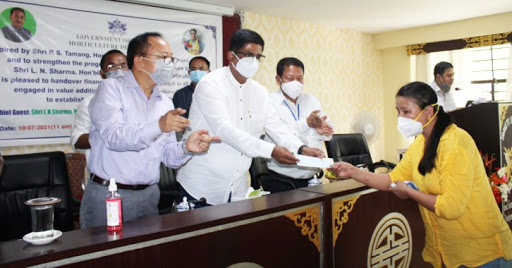 Gangtok: During a function held on Saturday, 10th July 2021 at the SAMETI building, ICAR complex, Daragon, 65 local Self Help Groups (SHGs) were engaged in value addition of agriculture and horticulture produce, when the Agriculture & Horticulture minister L.N. Sharma presented them with a financial incentive of Rs. 1 lakh in a cheque to establish processing units under Horticulture Mission for Northeast and Himalayan States

When addressing the gathering, SAMETI building, ICAR complex, Daragaon, Minister L.N. Sharma said the funds under the Horticulture Mission existed for years and as directed by the Chief Minister, the financial incentive was extended to the progressive SHGs of the State to encourage the SHGs to establish a small processing unit in their areas for value addition of agriculture and horticulture produce besides benefiting the farmers too.

To secure the maximum benefit, L.N Sharma further urged the SHGs to take innovative activities for the value addition of the agriculture-horticulture produce and lead the Sikkim farmers towards entrepreneurship instead of being limited to farming alone. Also, he asked to generate awareness among the farmers in their villages about the government schemes including cash incentives for select crops and vegetables under the state government.
This incentive will anyways ensure the boost of local crops production so that the consumers get a fair rate.

And if the SFGs can extend their help to facilitate the financial incentives to establish small processing units, so that the products are processed and packaged to get good returns, then they will be ready to include them in the agencies list soon. Also, the lease amount will be provided in case of barren lands taken for cultivation.
Horticulture Secretary M.T. Sherpa spoke about the importance of value addition in agriculture and horticulture produce for tapping the market.

The programme was also addressed by Farmers Welfare Board chairman Phurden Lepcha.
Earlier. Horticulture directors S.K. Tamang and Anita Thapa, officials and representatives of the 65 SHGs too attended the programme.