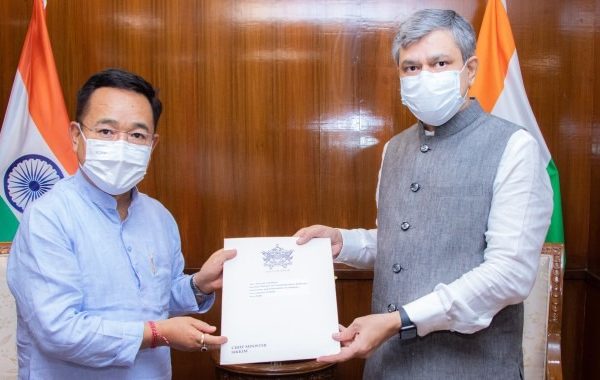 During the conversation, the Chief Minister noted that Sikkim had reaped significant benefits from the support provided by the ministry via the flagship programmes of the Digital India Initiative. He further stated that the National Informatics Centre (NIC), Sikkim State Unit, has been a constant source of assistance in the implementation of all Mission Mode and other e-Government initiatives. Similarly, he noted that NIC has been critical in sustaining a variety of digital teaching and learning procedures, as well as online meetings from multiple districts, health service coordination, and other State functions.

The Chief Minister stated that Sikkim is prone to landslides, particularly during the monsoon season, when road connection is frequently disrupted, affecting public services. As a result, he urged that electronic services be strengthened at the block and village levels as part of the “government at the doorstep” effort and the implementation of the slogan “Sabka Saath Sabka Vikas.”

Golay also briefed the Union minister on the newest Unified District Information System for Education (UDISE) 2019-2020, in which Sikkim outperformed all other states. However, he noted that the State urgently requires more bandwidth and internet connections, therefore he proposed that bandwidth be increased from the current 10 Mbps to 1 Gbps, as well as an autonomous and full-fledged BSNL circle for Sikkim.

The Chief Minister thanked the government for approving the creation of a Special Economic Zone in the Information Technology sector, for which land has already been located. In addition, he urged that the process of establishing NIC-Block Centres with NICNET backbones maintained by permanent NIC technical staff at each block headquarters in Sikkim be expedited.

By August 31, the Union Minister promised to create and execute an autonomous BSNL circle for Sikkim. He also consented to the Chief Minister’s proposal to build the railway station using Sikkimese design. In addition, he requested that the Chief Minister contact him directly in the event of any difficulties, according to the CMO statement.