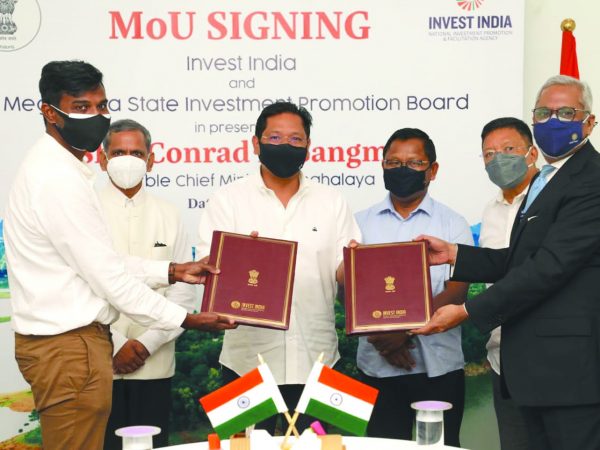 Shillong: Start-ups and a few of the unique products from Meghalaya are expecting a boost with the signing of MoU between the Meghalaya State Investment Promotion Society (MSIP) and Invest India, Union Ministry of Commerce and Industry. The MoU was inked in the presence of Chief Minister Conrad Sangma, his advisor Thomas Sangma, and Government Chief Whip Marcuise Marak.

The chief minister shared that the objective of the MoU is to leverage investment opportunities in key development sectors to boost trade and industries in the state of Meghalaya and adds that the MoU inked, will focus on both short-term and long-term plans, promoting trade ties with neighboring nations and also enhancing the entrepreneurial system in the state while laying the focus on promoting One Product-One District Programme.

Invest India team will support in planning the Global Value Chain and their immediate target will be in promoting start-ups alongside value addition of products like Lakadong turmeric, Eri silk, mushroom, pineapple, and jackfruit, Conrad added.

Meanwhile, Managing Director & CEO, Invest India, D Bagla, informed that they have already started their works through their North East desk by creating market linkage of Lakadong turmeric and import substitution alongside other products such as pineapple and honey from Ri Bhoi, with the center granting Rs. 13.89 crore for micro food processing units in the state under the Pradhan Mantri Formulization of Micro Food Processing Enterprises (PM-FME) scheme, informs Union Minister of State for Food Processing Industries, Prahlad Singh Patel, on Friday 30 July 2021.

As per the latest Annual Survey of Industries (2017-18) estimates, 1,242 persons were engaged in 27 registered food processing units in Meghalaya and the Union Ministry of Food Processing Industries under the Pradhan Mantri Kisan Sampada Yojana (PMKSY) has approved one mega food park (MFP) project, one agro-processing cluster project and two food processing projects in the state under creation/expansion of food processing & preservation capacities scheme, Rakesh Sinha, the Union MoS said stated in a reply

The PMKSY component schemes are demand-driven.
Also, under various component schemes, a higher percentage share of grant-in-aid is provided by the government against the eligible project costs provided for difficult and hilly areas, including the North-eastern region and SC/ST entrepreneurs.

The Ministry of Food Processing Industries has agreed with the Ministry of Tribal Affairs and Tribal Co-operative Marketing Development Federation of India (TRIFED) to provide training, handholding, and marketing & branding support to ST beneficiaries. TRIFED’s new brand TriFood for food products made by tribals or tribal self-help groups is another initiative.

In a response to Prahlad Singh Patel’s queries on the honey processing industry, the union minister said that Sohiong fruit is the approved product under One District One Product (ODOP) of PM-FME scheme for East Khasi Hills district and honey is the approved product under ODOP for South West Khasi Hills district.
Under the PM-FME scheme, support is given to the existing units for non-ODOP products also the existing units engaged in honey processing are also supported through credit linked subsidy of 35% of the eligible project cost,” the minister added.