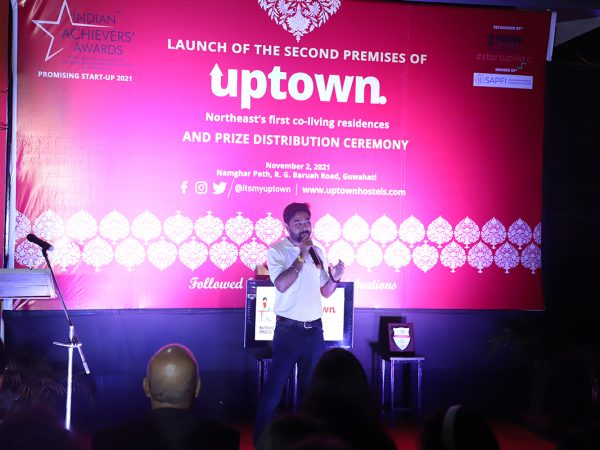 Guwahati: Northeast’s First Co-living Residences – Uptown, launched their second facility in Guwahati yesterday. At a gorgeous ceremony held in the evening on 2nd November at Uptown in Zoo Road, the new facility was launched by the Chief Guest of the evening Shri Pranjal Konwar, COO of IIM Calcutta Innovation Park and Start-up Assam – The Nest. Also present on the occasion were Shri Elvis Ali Hazarika, international swimmer, and RJ Preety Priyadarshinee of Radio Gupshup.

Speaking on the occasion, the founder of Uptown Sandeep Rajkhowa said that they have received an overwhelming response from various parts of the country when they opened their first property in July for female students and young working women, and the 50-seater modern day hostel facility was completely filled up within 30 days of its launch.

Looking at the demand, they are currently expanding their current capacity in the existing facility. Since, there are lot of enquiries from working men and male students, hence, Uptown has decided to open another facility exclusively for men at the Beltola area of the city. The new facility will have a capacity of around 50 occupants and would have AC and non-AC single and double seater rooms. Keeping with the benchmark amenities of Uptown, this hostel facility would also have an AC fitness centre, AC central lounge with IPTV connectivity, Wi-Fi, multiple small chill-out lounges, multi-activity cum study room, cafeteria, laundry services, power back-up, space for yoga, doctor-on-call and 24 hours security. Uptown has plans to open a few more such facilities across the city in the coming year.

Co-founders of Uptown, Anangaraj Saikia and Sanjoy Chanda were also present on the occasion who gave away the prizes of an Uptown Contest held a few months ago where the first prize winner bagged a cash prize of Rs.10,000 while the second and third prize winners were given cash prizes of Rs.5000 and 2500 respectively.

The event was compered by Nishtha Chaturvedi, who is a current boarder of Uptown. Many other boarders of Uptown performed cultural programmes at the event. The event was followed by fun events and dinner.