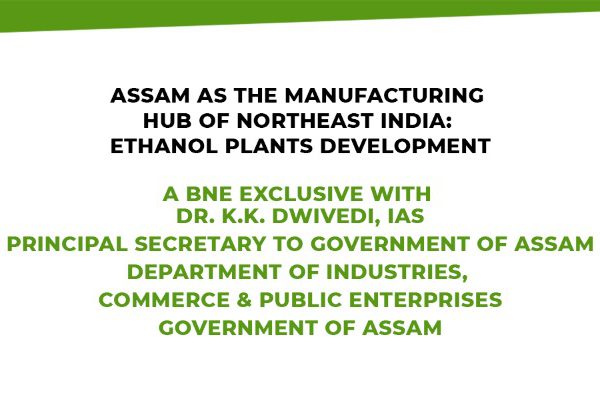 India’s energy security remains vulnerable until alternative fuels to substitute or supplement crude oil-based fuels are developed based on indigenously produced renewable feedstocks. In biofuels, the country has a ray of hope in providing energy security. Biofuels are environment-friendly fuels, and their utilization would address global concerns about the containment of carbon emissions.

In the context of the International perspectives and National imperatives, the Government of India introduced National Policy on Biofuels to facilitate and bring about optimal development and utilization of indigenous biomass feedstocks for the production of biofuels. The Policy envisages the development of the next generation of more efficient biofuel conversion technologies based on new feedstocks.

Department of Industries, Commerce & Public Enterprises, Government of Assam has been striving to attract private sector investments both within the state as well as nationally and internationally across various sectors, Ethanol for blended fuel has become the sector of prominence for an agrarian and petroleum-rich state like Assam.

In order to promote the manufacturing of Ethanol in the State, the Government of Assam introduced Assam Ethanol Production Promotion Policy, 2021 in August 2021 wherein we are providing several fiscal and non-fiscal support for the private sector entities to manufacture ethanol for biofuel in Assam.

2. What is the current Status and when can people of the State expect blending to commence in Assam?

With the Assam Ethanol Production Promotion Policy, 2021 declared in August 2021, Assam has attracted 15 private sector investments in the State amounting to over 2350 KLD of Ethanol output daily with an investment potential of Rs 3290 Cr which shall generate over 2500 Direct employment and nearly 7000 of Indirect Employment.

Out of the 15 proposed projects, 7 of them have already been shortlisted as vendors/suppliers by a consortium of Oil Manufacturing Companies. The proposed annual capacity of these 7 units is 970 KLD with a planned investment of Rs. 1154 Cr which will generate Direct employment for 925 people and nearly 4115 Indirect Employment

The State Single Window Agency under the Department of Industries and Commerce has already facilitated necessary pre-establishment approvals from the State. All 7 units have identified land across various parts of Assam. Construction of all the projects is expected to commence in January 2022 itself.

3. What are the other perceived benefits of Ethanol Manufacturing in the State?

The proposed entities shall use 1st generation technology for ethanol production which runs on 3 kinds of feedstock namely Maize or Corn, Rice, broken and unfit for human consumption, and Sugarcane. These 7 units would require over 7.5 lakh MT of Corn or Rice annually.

This creates an immense potential for backward integration with thousands of farmers, aggregators, and rice millers which will go a long way in improving market access for farmers thus ensuring steady income growth for farmers. Based on our estimates, the 7 ethanol units in Assam shall ensure savings of approximately US$ 1.05 Billion worth of Foreign exchange in 10 years. Similarly, the estimated procurement of feedstock like rice and corn for the same period is estimated at US$ 1.5 Billon.

These units beyond ensuring import substitution and energy security of the region will also ensure ample supply of by-products like Dried Distillers Grain Soluble (DDGS), an essential raw material for the cattle and poultry feed industry, and Carbon Dioxide, which, in turn, can help the carbonated beverage industry to grow in the State. Carbon Dioxide produced by these units will also be converted into dry ice, which will benefit the trade and commerce of perishable commodities, especially in the fishery sector.

Numaligarh Refinery Limited plans to set up a Bamboo based Bio-Ethanol project at Numaligarh, Assam for the production of fuel-grade Ethanol from Bamboo which is locally available in abundance in this region. The plant shall have the capacity to process 300 TMT of Bamboo and shall produce 49 TMT of Ethanol together with associated platform chemicals. The Bio-ethanol project shall also have a captive power plant to produce 20 MW of power using bamboo residue as the feed.

In India, Ethanol is traditionally produced from sugarcane; but for a country like India with a huge population, it cannot afford to divert sugarcane for producing Ethanol as it may lead to a supply shortage of sugar, which is an important food item in India. Therefore, using ligno-cellulosic biomass to produce fuel-grade Ethanol is being encouraged by the Govt. of India to meet the target of 20% blending of Ethanol. Ligno-cellulosic biomass such as rice straw, wheat straw, corn Stover, bamboo, sugar cane bagasse, etc. is available in huge quantities in India.

This initiative of conversion of Bamboo to Ethanol is being tried first time in the world by using the Chempolis’ technology. Once it is commissioned this will be the first project in India for producing Ethanol from ligno-cellulosic biomass by using the 3rd generation technology of Chempolis. This will prove to be a model plant for hundreds of such plants all over India considering the huge reserve of ligno-cellulosic agricultural waste all over India. This will certainly help to meet the ambitious target of Govt. for 20% Ethanol blending with Gasoline, which will help in saving valuable foreign exchange by reducing the crude import.

5. What is your vision for the Industry sector of Assam?

The Goal is to make Assam the Manufacturing Hub in not only Eastern India but as well as in the southeast Asian region especially between the club of neighbouring countries including BBN and Myanmar. We have been projecting Assam as a potent destination for investments in the region. As a matter of fact, we have also been calling Assam as India’s Expressway to ASEAN.

Assam can leverage on the huge demand across a spectrum of goods and services including pharma, FMCG, and Food Products which can not only cater to demand within India but also in markets in Myanmar, Bhutan, and Bangladesh as well. To achieve this, we have already set in motion a series of steps like the MSME Facilitation Act which does away with the need to apply for clearances and approvals in almost all areas for a period of 3 years. We have been a forerunner of implementation of EoDB reforms in the North East and improving on the same every year. To enable industries to have access to plug and play Infrastructure in the state we have developed various Industrial Development Centres, Industrial Estates, etc, and are in process of setting up more for the future. We then plan to continue reaching out to potential investors in the rest of India and other countries through various ways including platforms like Investors’ Conclaves, Roadshows, media and advertising, investment promotion agencies so that we can generate sufficient interests in the target segment of investors as well create leads for the state to convert into real investments.

In addition to the investment outreach programmes, a key focus would also be to promote local startups and first-generation entrepreneurs through various initiatives and handhold them to promote their businesses.

I think Assam will also become a strategic interest location because of changing political environment in the world and would likely be at the cynosure of eyes of important countries like South Korea, Japan, US, etc in the coming times as cross border relationship and engagement of Assam becomes deeper and the state of Assam has constituted an Act East Department to catalyse the same objective.

I believe the state would be ready for a new phase of growth in a few years with brand new infrastructure and a congenial environment for businesses in both MSME and Non-MSME sectors. The start-up and entrepreneurial segment of Assam will be ready to take up the challenge and play a key role in being at the driving seat of tomorrow’s growth story of the State.