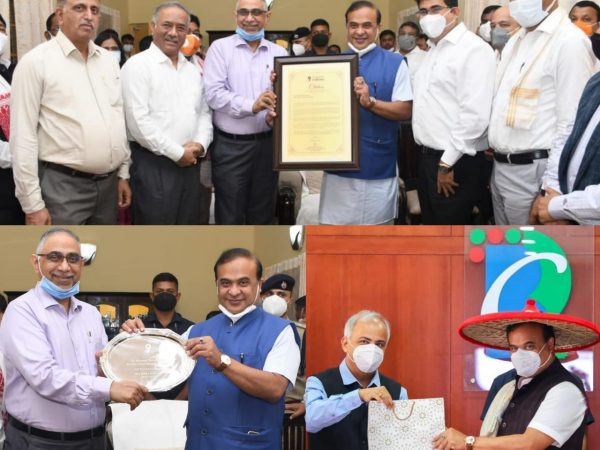 CM visit to AGCL  headquarters at Duliajan  to look over of the ongoing projects and upcoming projects .

“ One of the first Natural Gas transmission and distribution which was established in the year  1962.AGCL continuing with extreme effort achieved a 40 percent rise in its gas reserves. AGCL  made an approval turnover of Rs.300 crore during the last fiscal and paid a dividend of Rs 5 crore to the government of Assam,” and also government collectively arrived at a decision to take AGCL’s turnover to Rs 1,000 crore in looking in the increment in the amount of dividend paid by AGCL to Assam Government,” the chief minister said.

Assam’s chief minister appeals to the management of AGCL  to take forceful action on expanding the pipeline gas network in the tea gardens area of the  Dibrugarh and Tinsukia districts.

CM visited BVFCL  at Namrup and  reviewed its units and proposed efforts for commissioning of its fourth plant.

“ To realize our dreams of BVFCL, Namrup Thermal, and APL, we need to strengthen the gas supply scenario from AGCL. The industrial sector will only become prosperous if we can fulfill our target of Rs 1,000 crore turnover from AGCL” CM said.

As per CM’s vision and targets on upcoming projects from APL, Namrup Thermal, and BVFCL,  he said “while the center has approved Rs 100 crore grant in aid, the State Government will also invest 26 percent in BVFCL.

Looking back to  Baghjan Blowout last year he said, “ socio-political happenings post the Baghjan blowout and some which can ignored issues occurred resulted in less production of crude oil by OIL.

“Now the government has decided to provide all the necessary help and assistance to OIL so that the company can be back on track. As the government strives to augment the state’s power generation substantially, the government would need OILs support by way of enhanced supply of Gas to power generation companies. Sharma assured OIL that issues about land acquisition and forest clearance are being looked into,” CM said.