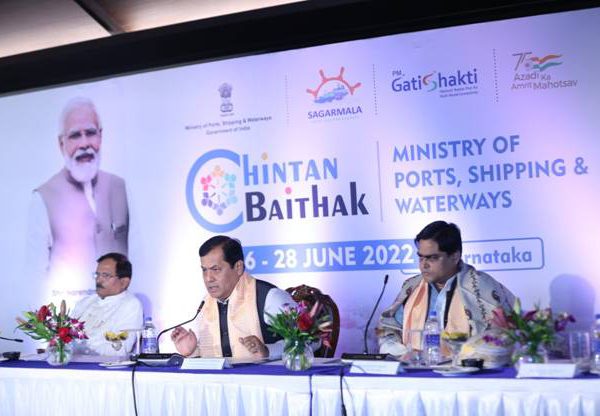 Guwahati: In order to empower and enable conduits for economic transformation, the Centre takes several steps in the vision to transform the blue economy and realize the rationale behind “transformation through transportation.” The infrastructural development of coastal areas will be the focus area for the government to promote India’s marine economy.

The Ministry of Ports, Shipping, and Waterways (MoPSW) has begun a three-day Chintan Baithak in Karnataka to discuss and deliberate ideas and innovations that can propel India’s blue economy.

All of these steps, he says, are aimed at transforming the blue economy and realising the rationale behind ‘transformation through transportation.’ He stated that in order to create an Atmanirbhar Bharat, great care must be taken to maximise the enormous opportunity of the Indian marine economy.

He stated that our role as a ministry of ports, shipping, and waterways is to empower and enable conduits for economic transformation.

The Minister stated that through this Chintan Baithak, the best minds in the country have come together to deliberate, discuss, and decide on various challenges and opportunities. He stated that this will go a long way toward preparing the roadmap for the smooth and timely implementation of our plan to develop and modernise our ports.

Sonowal stated that we must consider the PPP model for this, which will free up government resources for Greenfield port development. This will comprehensively develop India’s coastal regions for the benefit of people living in these areas while also assisting businesses in obtaining the best services with ease, he added.

To promote multimodal connectivity, the Ministry is actively working on the comprehensive development of both major and minor ports. During the discussions, the importance of a well-coordinated ecosystem was emphasised.

Sonowal added that ports must expedite infrastructure projects at their end in order to increase capital expenditure realisation.
Priority was placed on rail-road-waterway development in order to effectively implement the PM Gati Shakti National Multi-Modal Connectivity Plan. He believes that a master plan that allows ports to identify and resolve bottlenecks in multi-modal connectivity is essential.

To promote multimodal connectivity at ports, 157 road connectivity projects and 137 rail connectivity projects are being undertaken. The Union Minister urged all port authorities to identify, initiate, and complete one major modernization and mechanisation project. This will increase port capacity while also improving operational efficiency. These completed projects, according to Sonowal, would demonstrate the Major Ports’ efforts to complement the Prime Minister’s impetus for infrastructure development and its multiplier effects by increasing capital expenditure to Rs. 7.5 lakh crore in the current fiscal year, a 35.4 percent increase over the previous year.

According to MoS MoPSW Shripad Yesso Naik, we should lead the world in new technology and port development. Other fields related to ports and shipping should be considered for development as well, he added.

Shantanu Thakur, the MoPSW’s MoS, detailed the Indian shipping sector’s strengths and opportunities in the Ports and waterways sector were detailed by the MoPSW’s MoS. He also praised the previous “Chintan Baithak’ results.