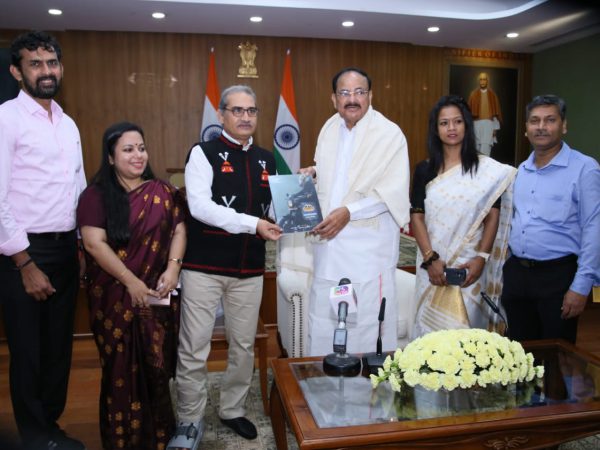 The growing rider community of the North East has the potential for the economic development of the eight states by presenting their respective states to the world outside.

The NE is a treasure trove of scenic locations with unique cultures and traditions, a ‘paradise’ as described by the Centre. However, the region has remained neglected by travelers.

The Vice President of India, M. Venkaiah Naidu met with a group of riders from across India on July 26th and applauded their expedition to explore the eight northeastern states. He urged the riders to offer their knowledge of remote locations and explorations for the government to undertake developmental activities and also promote the areas for rural and eco-tourism.

As a part of the ongoing Azadi ka Amrit Mahotsav, the Amazing Namaste Foundation organized the North East on Wheels: Ride to Experience in April 2022. 75 riders from across India participated in the expedition, led by bikers of the NE states. For 9 days, the participants, grouped into six teams, traveled the eight states, covering over 1400 km by each biker. They explored a total of over 1 lakh kms.

The expedition aimed to introduce the several unexplored places of the NE to the participants of the other states with an aim to attract tourists and other riders that would be benefitting to these areas and the states’ economies as a whole.

Speaking to Business Northeast, Meenakshi Das, the only female rider from Assam in the expedition, who also led the group to Sikkim, said, “The expedition aimed to introduce the beauty and the many hidden gems of the states, from our tribal cultures to diverse traditions, to our ethnic food and lifestyles. The Centre has called Northeast a ‘paradise’ and has been promoting ‘Dekho Apna Desh’. The North East on Wheels envisaged doing just that.”

Explaining the potential of riding communities in the holistic development of the region, Das said, “Riders have the advantage of commuting through difficult terrains that are beyond the reach of four-wheelers and government agencies. We are enthusiastic explorers and ride through rivers, mountainous roads, and even places where there are no roads. We reach destinations and meet with people that are otherwise inhabiting deserted areas.”

“The government can use our knowledge and us to reach these people and cultures. Our rides are beneficial in promoting tourism in the region. Nowadays most riders are also bloggers. Our videos and blogs can show the world the unseen, like I do in my YouTube channel, ‘Riders Meenakshi Bedanta‘, ” she added.

The riders have met with the DoNER and the Union Tourism Ministry to discuss the prospects of their help in the development of the region. “The Centre has asked us to put forth our suggestion and we will be doing so soon after discussing with the locals about their needs.”

Das said that during the North East on Wheels they have also conducted cultural programs of the local tribal cultures and have promoted local businesses and start-ups.

“Barring commercial establishments we have stayed in local homestays, ate local cuisine, and brought products from local businesses. The outsiders got an authentic feel of the region and returned happily. They will spread the experience and bring in more riders and travelers. Why go abroad when the NE states have so much to offer,” Meenakshi said.

Urging for sponsorship, Das highlighted that the riders’ expedition to distant places outside the region, can be used by the governments to promote their schemes and even by private businesses to promote their brand and products.

“We need sponsors, as it is not possible to bear all expenses. If the government sponsors us, we can do campaigns and even help with medical and relief camps in remote locations. We have already done campaigns on sanitation and hygiene, saving water, literacy, ‘Beti Bachao Beti Padhao’, and others. Similarly, we can carry logos of brands as promotion,” she added.

Riding expeditions usually carry a slogan, and the riders of the eight states have been promoting ‘Know our North East’ in their expeditions to other states and to Nepal and other neighbouring countries.

The Centre has shown keen interest in using the rider community to promote tourism and use them for the economic development of the region. Vice President Naidu has also offered the government’s support for their benefit and expeditions.