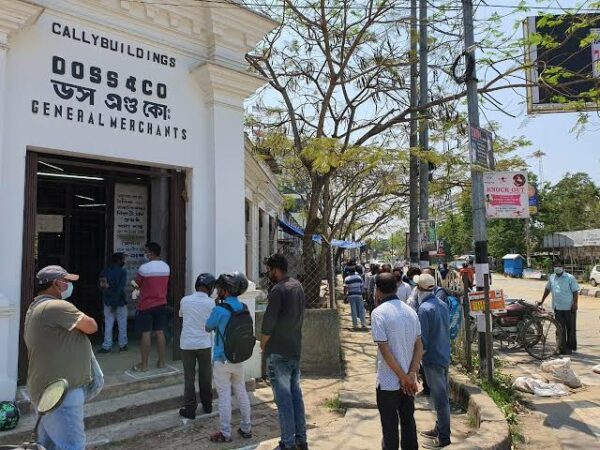 In the present times, traditional markets are paving the way for the development of departmental stores, supermarkets, and specialty stores.

Although the concept of departmental stores is relatively new to the region, the urban residents are slowly and steadily getting adapted to the modern store culture.

But did you know Jorhat district in Assam has the first Departmental store in the Northeast region of India?

Back in the year 1957, Doss & Co. emerged as the first registered departmental store in the Cally building, KB Road, Jorhat, Assam. It is to be mentioned that the Cally Building, where the store is housed was constructed in the year 1910. Doss and Co was started in 1865 and shifted to this building in 1915.

Business Northeast had a conversation with the store owner Tapan Kumar Das to know about the trend of sales and more.

• How does Doss and Co differs from modern-day’s departmental stores?

Tapan Kumar Das: Being the first departmental store in the Northeastern region of India, Doss and Co holds immense uniqueness in itself. The goods and service facilities that are being provided by the modernly built departmental stores are subjected to certain limitations.

Doss and Co on the other hand, during the British reign itself, made a reputation of selling almost everything from a needle to a car. We held the franchise for the Ford Motor Company. Besides, it used to provide the services of the printing press, newspapers, magazines, toys, liquor, cosmetics, confectionery, and all other sorts of daily essentials.

It was one of the oldest dealers of Nestlé Milk products in India.

• Who were the customers of the store?

Tapan Kumar Das: The highest customers of the store were the aristocratic sections of the society such as members of the tea planter’s family, officials engaged in tea gardens of Assam, especially those owned by Sterling company, administrators, bureaucrats, and a section of tourists. These goods provided by Doss & Co. were regarded as quality and luxury products not affordable to ordinary people. A major section of goods was supplied to the clubhouses which existed in the small towns of Assam namely Jorhat, Golaghat, Dibrugarh, Moran, and Duliajan.

• How much capital was invested while establishing Doss and Co?

Tapan Kumar Das: The Doss & Co was opened nearly a hundred years ago and the organizational structure of the store was incorporated as a private company in the year 1955 with an authorized capital of Rs. 5 lakh and a paid-up capital of Rs. 1.5 lakh.

At present, the company’s authorized capital stands at a total amount of Rs 50 lakhs.

• Is the emergence of modern departmental stores hampering Doss and Co’s legacy of sales?

Tapan Kumar Das: Yes, with the emerging range of departmental stores in every nook and corner of the city, we are facing a decline in sales. However, we get most of the benefits from tourists now. Tourist visit to see the oldest departmental store in the region and the tag of being the first have managed and helped us to set our foot firm in the market.

• Does the store have more branches in Assam?

Ans: Yes, there are two other branches of the store which are situated in the towns of Golaghat and Nagaon.

With the modern-day civilization dawning upon the entire country, Doss and Co have been preserved as a single-story option till today, maintaining its authenticity and aura.