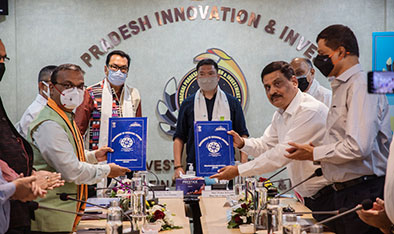 Itanagar: A memorandum of understanding (MoU) was inked between North Eastern Electric Power Corporation Limited (NEEPCO) and Arunachal Pradesh government on 14th August 2021, for developing two hydroelectric projects with a combined generating capacity of 210 MW power.
After the MoU signing, a total of 6 projects are allotted to the NEEPCO, with a total installed capacity of 1,325 MW. Out of the 6 projects, the 405 MW Ranganadi, the 110 MW Pare, and the 600 MW Kameng hydropower projects were commissioned in 2002, 2018, and 2020-21, respectively. The projects that are to be developed are the 120 MW Nafra (West Kameng) and the 90 MW New Meting (Tawang) hydroelectric projects, NEEPCO stated.

Hydropower Commissioner Prashant S Lokhande signed the MoU on behalf of the state government, in the presence of Chief Minister Pema Khandu and Deputy Chief Minister Chowna Mein and the NEEPCO’s Chief Managing Director (CMD) VK Singh inked the documents on behalf of the power developer.
While speaking during the occasion, the CM said that the central public sector undertakings will be the harbinger of investment in Arunachal and commended the performance of the NEEPCO in developing hydropower projects in the state.
A dozen more hydropower projects with a power generating capacity of 7,800 MW “are in the advanced stage for allotment to the NEEPCO, which would bring an investment of around Rs 80,000 crores to the state and lead to the tremendous all-round development of the state.
Also, Arunachal will get 12 percent free power from the three hydro plants commissioned by the NEEPCO, in addition to a host of other benefits like education, health, and entrepreneurial opportunities around the project areas.
The CM assured to provide all necessary assistance in developing the projects allotted to the NEEPCO.
“The hydro potential in the state should not be on paper only but it should be developed physically,” he said.
The CM informed that the NHPC has scheduled to commission two units of the 2,000 MW Subansiri HEP by August 2022 and to fully commission the project by August 2023.
Meanwhile, Mein requested the NEEPCO to commission the projects being developed by it on time.
Chief Secretary Naresh Kumar requested the NEEPCO CMD to liaise with the DCs of the two districts and allot contract works “not involving expertise” to local contractors. The NEEPCO CMD said that the request for the allotment of eight other hydro projects, totaling approximately 7,800 MW is under consideration by the state government.
The NEEPCO’s Technical Director HK Deka and CGM (Corporate Planning) A Choudhury were also present during the occasion.