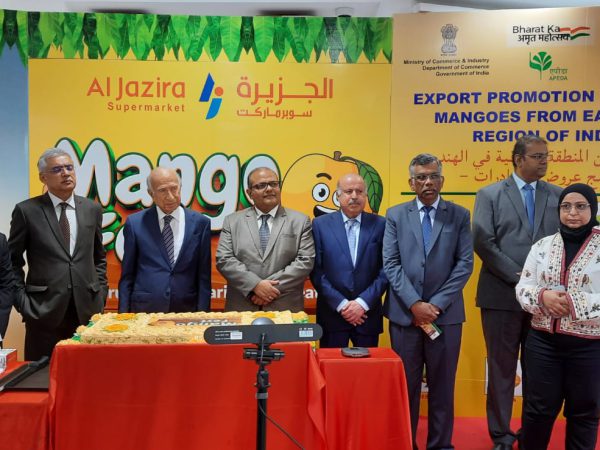 Guwahati: In a major boost to mango exports, the Agricultural and Processed Food Products Export Development Authority (APEDA) inaugurated an eight-day Mango Festival in the Kingdom of Bahrain on June 13 in collaboration with the Indian Embassy and Al Jazira Group.

At the event, 34 types of mangoes from the eastern states of West Bengal, Bihar, Jharkhand, Uttar Pradesh, and Odisha are on display at eight different Al Jazira group supermarkets in Bahrain. Twenty-seven of these kinds were obtained from West Bengal, while two each came from Bihar, Jharkhand, Odisha, and Uttar Pradesh. All mango cultivars were obtained directly from farmers and two farmer-producer organizations. The mango exhibition will run till June 20, 2022.

All 34 types of Indian mangoes were on exhibit at Al Jazira supermarkets in Bahrain, including Hamala, Mahooz, Zing, Juffair, Budaiya, Adilya, Seef, and Riffa. Aside from mangoes in general, the event included other mango preparations such as mango cake created by Al Jazira bakery, juices, several sorts of mango shakes, and so forth.

Previously, most worldwide exhibits included mango varieties from the southern and western areas, such as Alphonso, Kesar, and Banganpalli.

The Indian Ambassador to Bahrain, Shri Piyush Srivastava, launched the Mango Festival in the presence of Al Jazira Group Chairman, Mr. Abdul Hussein Khalil Dawani. In collaboration with APEDA, the Murshidabad district government allowed the transit of mangoes to Bahrain.