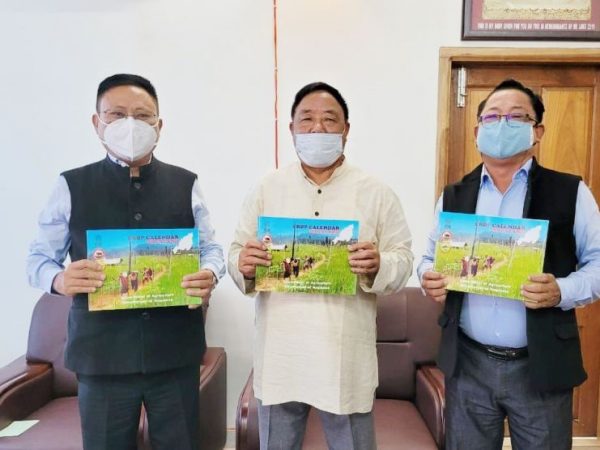 Nagaland: A crop guide book for the agricultural officials and for the farming community titled ‘Crop Calendar Nagaland’ has been launched by Kaito Aye, the Agriculture and Co-operation Minister Nagaland.
This crop guide book is the first of its kind which would cover all the districts of Nagaland and is published by the Agricultural Department during a press release.

During the launch, Kaito Aye acknowledged the efforts of the agricultural department expecting that the guidebook will provide a source of information and knowledge to the department officials and the farming community.
Adding, the agricultural and allied departments play a major role in the Agri sector during the global pandemic and so has urged the continued efforts of the officials to improvise more, provide relative information and create livelihood enhancing activities.

The book also provides a zone-wise identification of crops making it convenient to approach different farmer communities. Also urging the officials to constantly monitor to bring out the effective measures.

Further APC Y Kikheto proposed to published the crop guide book in local languages to reach out to the larger farmer community. And he mentioned the requirement of more water bodies to cover up the drought-affected areas of the state.

The 2025 goal of food security, empowering and improving living standards of the farming community by Agri dept. has been highlighted thereafter by Director Ben Yanthan.

The effect of the pandemic has worsened the agricultural activities, but govt has worked out few strategic contingency plans to deal with crop failures, damages with alternative cropping options.

The publishing of the Crop Guide Books has been sponsored by ATMA, Nagaland.

Moreover, Deputy Directors of the Directorate has been assigned to their respective district Calendars to work out the plans