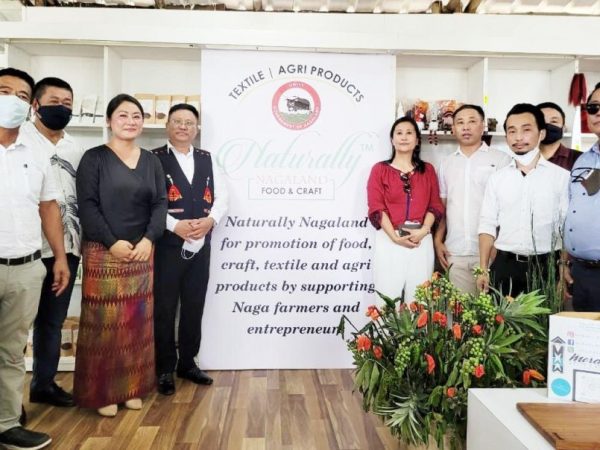 Nagaland: With the support of the state government to promote organic Agri and Allied products, arts, crafts, and handloom of the state an initiative ‘Naturally Nagaland ‘ was launched by Agriculture production Commissioner, Y Kikheto Sema at 4th mile, Dimapur, on the 9th of July, Friday with the objectives of promoting entrepreneurs, farmers, and self-help groups.

Speaking after the inauguration, Kikheto informed that to promote Food, craft, textile, and Agri products of the local farmers and entrepreneurs the outlet was conceptualized by the government of Nagaland.

“Such entrepreneurs may sell their products under the brand name Naturally Nagaland,” he added. The State government has created the outlet by identifying the locally processed products with nutritional facts.

“Even though many entrepreneurs want to sell their products in a standardized manner, they are unable to do so because of the financial and marketing constraints and therefore the State government has come up with this novel idea to provide an identity to the unique local products of the State,” Kikheto said. Also informed that ‘Naturally Nagaland’ would extend the required support by creating a market chain for the entrepreneurs while also identifying the indigenous and medicinal food products of different districts and tribes.

He said that the government plans to open similar outlets in Guwahati, Shillong, and Bengaluru where there is a huge concentration of Naga people. Additional Director, DUDA, Anungla Phom informed that Rs 1000 per month per rack/shelf would be charged from the entrepreneurs who would also get the benefit of displaying their products at the outlets in Delhi and Kolkata. However, for a year, entrepreneurs will not be charged for using the shelf at the outlets.