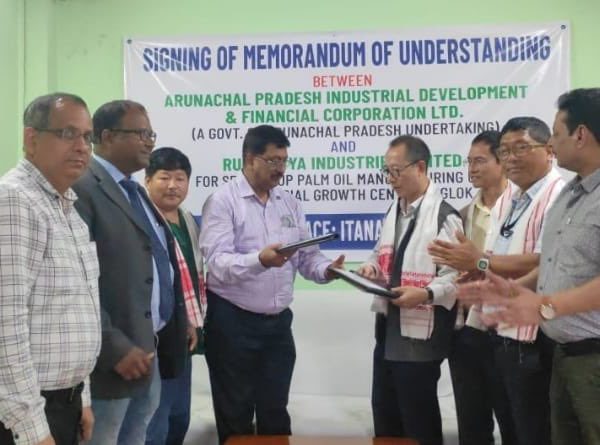 The agreement was signed by APIDFCL MD Hage Tari and Ruchi Soya NE Region head Subhas Bhattacharjee.
According to Arunachal Pradesh Chief Minister Pema Khandu, “this will go a long way in boosting farmers’ confidence in taking up palm oil cultivation.” Farmers and other entrepreneurs will benefit since the state’s unutilized land could be used to grow oil palms as a raw material feeder for the palm oil manufacturing unit.

The APIDFCL was founded in 1978 in accordance with the Companies Act of 1956. The APIDFCL owns 51.07 percent of the equity, while the tribal affairs ministry owns 48.93 percent. The corporation was established as the state’s apex industrial development and financial institution to promote industries and act as a catalyst for the growth of entrepreneurship, industrialization, and job creation for the state’s tribal population.

Ruchi Soya Industries has evolved as an integrated player in the edible oil business, with a presence across the entire value chain, from farm to fork, and secure access to oil palm plantations in India, since its inception in 1986. Ruchi Soya is also one of India’s largest palm plantation companies, with 22 manufacturing units totaling over 11,000 tonnes per day of refining, seed crushing, and packaging capacity.