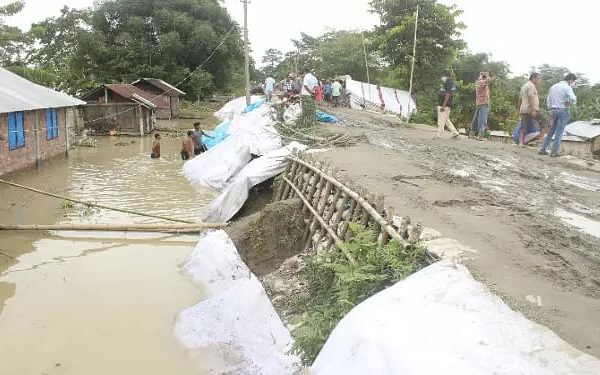 Guwahati: In a recent drome survey, it was reported that the construction of roads on river embankments would lessen the distance among key places, said the Chief Minister of Assam, Himanta Biswa Sarma during the Assembly on Wednesday, 11th August 2021.

The embankment of the Brahmaputra connecting Bogibeel with Majuli was cited by the Assam CM who holds the PWD profile too along with the construction of dyke by the Brahmaputra from Laharighat which shall develop a road that will connect Guwahati with Silghat.

Also, a project was announced by Ajanta Neog, the state Finance Minister to construct 1000 km of roads on dykes of the Brahmaputra and other rivers with a funding of Rs. 200 cr.

The PWD has taken the responsibility to construct the roads on river embankments of around 7,000 km in length. The dykes will be studied scientifically first to ensure if they can be constructed or not.

The Assam CM also stated that the drones will be used for the further surveying of road construction and plan out its strategies.
The Palasbari-Sualkuchi bridge over the Brahmaputra is completed which will cost around Rs. 4,000 cr.
Sarma has further met Nitin Gadkari, the Minister of Road Transport and Highways to discuss the proposal to construct a 35-km long elevated flyover in Kaziranga. And a bridge over the Brahmaputra will be coming soon between Morigaon and Darrang Districts, followed by road widening of Dergaon to Golaghat.

Moreover, another road will come up between Udalguri and Rangapara via Dhekiajuli and as stated by Assam CM, the PWD department will construct an elevated road in landslide-prone areas to complete the work of the East-West Corridor.