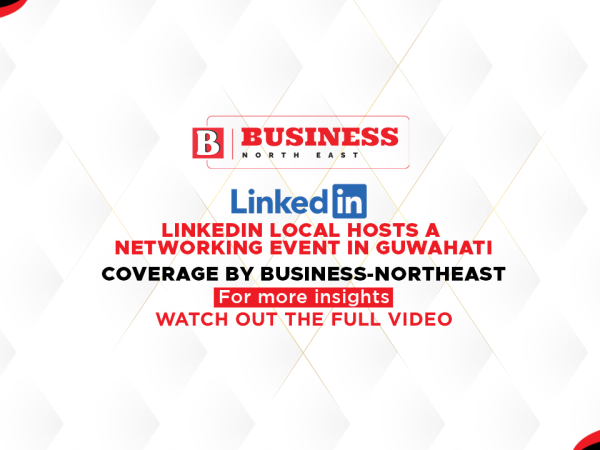 Guwahati: LinkedIn local in Guwahati has the potential to be a networking platform for people in the Northeast to connect and grow.

After two years, the LinkedIn local in Guwahati, organised by a vibrant team at the Nedfi Convention Centre, had a successful event.

Previously, LinkedIn local hosted five successful networking events across the nation. The 6th edition of LinkedIn local Guwahati was attended by around 80 people. An intriguing interactive session, i.e. networking, took place at the event. Attendees included professionals from firms and startups such as Tech Variable and Amazon. At first, the guests took part in an introduction session where they met people from various fields. It was a free networking event.

According to the city host for LinkedIn Local, this networking platform provides a promotional-free session.  This event also included a few engaging elements, such as games and activities.

Mohsin Raja, the City host, further said that the Guwahati LinkedIn community, as a strategic networking tool, will directly help and benefit the people in professional aspects. There are real-life instances of people who have benefited greatly from this network, he noted.

Continuing, NorthEast people are socially less active, thus we as a networking group are trying our best to reach out to folks in the North East, a social program that links individuals from all over the world to lend a helping hand in fields such as work, career, and so on.

So far, we have held our event in Guwahati and Tezpur, and we have team members in Imphal, Dibrugarh, Shillong, and Itanagar. We plan to hold events in remote parts of the Northeast too. LinkedIn local Guwahati would also want to hold sessions on NFT, LinkedIn usage, LinkedIn marketing, and other subjects too.

The second part consisted of a panel discussion regarding the broader picture for start-ups and entrepreneurship in the NorthEast.

The panellists for the event were Dr. Sriparna Baruah, Head of IIE, Mr. Joutishman Dutta, Managing Trustee, Down Town Trust, and Mr. Pranjal Konwar, COO, Assam Startup-The Nest. According to the panellists, startups, which are now a thriving businesses in India, have gone a long way given their massive change.

Furthermore, they addressed extensively numerous aspects leading to company failures, such as incubation, ideation, and funding.  According to one of the attendees at today’s event, “this event provided a terrific networking platform.” “Most of them were there to speak about their professional and commercial journeys, and a nice network may be built through this community-building event,” said the attendee.

The LinkedIn local Guwahati meet-up was a success, as it was here to assist people to connect and developing a community where they can learn, grow, and support others through meaningful interactions.

As they prepare their next set of events here at NorthEast, their strategic goal is to strengthen networking through offline interactions.